Hint: There are a lot of dhols involved 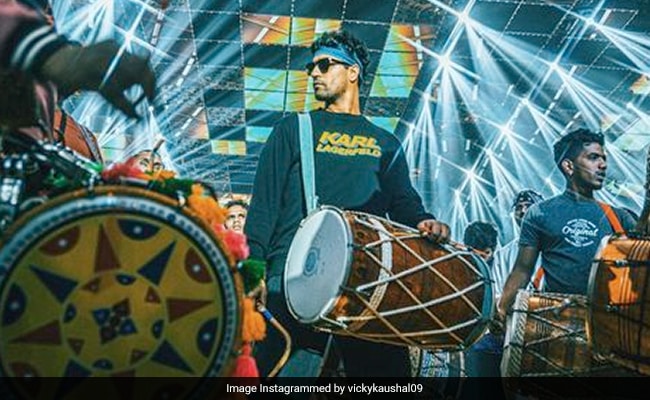 Vicky Kaushal posted this from his rehearsals. (courtesy: vivkykaushal09)

There is no doubt about the fact that Vicky Kaushal is an absolute rockstar both on-screen and off-screen. His body of work is proof that the actor is one of Bollywood's best performers. And we are happy to report that Vicky Kaushal will be showing off some of his enviable talent on the Filmfare Awards night, this year. If his latest Instagram post is anything to go by, Vicky Kaushal will be putting up a spirited dance performance with a host of background dancers. In the image, Vicky and the group are seen standing with Indian dhols hanging around their necks. Sharing a glimpse from what appears to be rehearsals, Vicky Kaushal said: “Let's go!” tagging Filmfare.

A few days ago, Vicky Kaushal shared few images from the sets of celebrity talk show Koffee With Karanand wrote, “Up next.” Replying to the post, actress Sharvari – who is rumoured to be dating Vicky's brother Sunny Kaushal said – “So cool.” Sunny Kaushal too said: “Oh bhaisaab,” with fire emojis. Actress Amruta Khanvilkar said, “Ohoooo mhanje,” with fire emoji.

Meanwhile, Vicky Kaushal has begun work on his new film Sam Bahadur. Sharing a video in which he is seen prepping for the role of legendary Chief of the Army Staff of the Indian Army, Field Marshal Sam Manekshaw, with director Meghna Gulzar and co-stars Fatima Sana Shaikh and Sanya Malhotra, Vicky Kaushal said, “Only gratitude as we set out on this extremely special Journey. Sam Bahadur – now filming!”

Sharing another set of pictures from Sam Bahadur's script reading sessions, Vicky Kaushal said: “Reading together, a story we are honoured to tell. Of a Soldier and a Gentleman. Our Sam Bahadur.”

Recently, he also shared a post celebrating seven years of his breakthrough film Masaan. He said in the caption: “7 saal ho gaye! Dil se shukriya.” Abhishek Bachchan and Dia Mirza congratulated Vicky Kaushal in the comments section. Director Zoya Akhtar said: “What a film and how sublime were you? Congratulations,” with a heart emoji.

In addition to Sam Bahadur, Vicky Kaushal will also be seen in Govinda Naam Mera and Laxman Utekar's untitled film with Sara Ali Khan, among others.