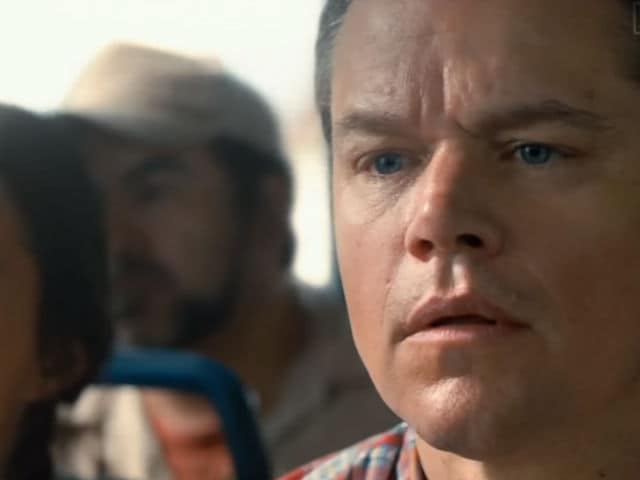 Venice: The 74th Venice film festival kicked off on Wednesday with Downsizing, a sci-fi drama starring a miniaturised Matt Damon, opening to enthusiastic early reviews. Occupying a curtain-raising slot that has come to be seen as a strategic launchpad for films with Oscar ambitions, Alexander Payne's part satirical, part save-the-planet new work was hailed by the trade press as an intriguing and original breath of fresh air from the Sideways and Nebraska director.

The Hollywood Reporter said Alexander Payne had "hit the creative jackpot," while Variety welcomed a "ticklish and resonant crowd pleaser for grown-ups".

London's Evening Standard was more reserved, praising the film as "often very funny" but bemoaning the abandonment of its initial satirical edge.

Set in the near future, the film is based on the premise that Norwegian scientists have found a way to literally reduce humanity's environmental footprint by downsizing humans to five-inch (12.5-centimetre) versions of themselves.

Soon however the technological breakthrough is being exploited for different reasons, as a means of enabling people to access a much more luxurious lifestyle than they could ever afford in the big world.

A combination of ecological and material motivations for being shrunk appeal to Paul Safranek (Matt Damon), a kindly and well-meaning but stressed and frustrated occupational therapist from Omaha, and his wife Audrey, played by Kristen Wiig.

They sign up for the surgery but she gets cold feet at the last minute, leaving Damon to embark alone on his adventure in the miniaturised world he inhabits post-surgery.

Among those he comes into contact with there are a Christoph Waltz, who plays Dusan, his louche, party-loving neighbour in his miniature condominium, and Vietnamese cleaner Ngoc Lan, played by Hong Chau.

She, it turns out, had been forcibly miniaturised after being imprisoned as a dissident in her homeland and has lost a leg below the knee as a result of being smuggled into the United States in a television box.

Intrigued, Matt Damon strikes up a friendship with her, taking the film in an unexpected Romcom direction that allows Payne to tie up his themes about the search for a better life, impending environmental catastrophe and the need, above all, to live in the moment. Scripted by Alexander Payne, a two-time Oscar winner for his screenplays, and frequent writing partner Jim Taylor, the film will be hoping to emulate the success of La La Land, Birdman and Gravity, all Venice openers in recent years which went on to bag a bunch of awards.

Also being unveiled on the opening day was Nico, a bio-pic focusing on the final years of the Velvet Underground singer and Andy Warhol muse which is being shown in the festival's "Horizons" section dedicated to cutting-edge productions.

Downsizing is one of 21 films competing for Venice's top prize, the Golden Lion, which will be handed out on September 9, along with a string of other awards including the first for films in a new competition for virtual reality productions.

British director Haigh will be presenting Lean on Pete, his first film since the acclaimed 45 Years, while Thornton arrives in Venice next week to promote Sweet Country, a Western set in 1920s Australia that deals with the treatment of the country's indigenous peoples.

Along with Clooney, the major stars due on the red carpet include Robert Redford and Jane Fonda, who will pick up lifetime achievement awards while plugging their new film Our Souls at Night, a Netflix drama about an unconventional romance between two elderly neighbours.

The theme of love after a certain age is also addressed in Leisure Seeker, in which Helen Mirren and Donald Sutherland star as an independent, free-spirited couple coming to terms with Alzheimer's.

Javier Bardem is also to be seen playing opposite Jennifer Lawrence in mother!, a new film by Black Swan director Darren Aronofsky, that is one of several thrillers vying for honours.

Promoted by a Mother's Day-release of a poster showing Lawrence holding her own bloodied heart, the film tells the tale of a couple thrown into turmoil by uninvited guests.

Another spine-chiller features Ethan Hawke in Paul Schrader's First Reformed, which turns around a dark secret harboured by members of a church who are tormented by the deaths of loved ones.

Also expected to make waves, with an out-of-competition world premiere, is Victoria & Abdul, Stephen Frears' treatment of the true story of the elderly Queen Victoria's later-life friendship with an Indian clerk. The British director is to be honoured on Sunday for his innovative contribution to cinema.

(Except for the headline, this story has not been edited by NDTV staff and is published from a syndicated feed.)
Comments
venice film festivalmatt damondownsizing