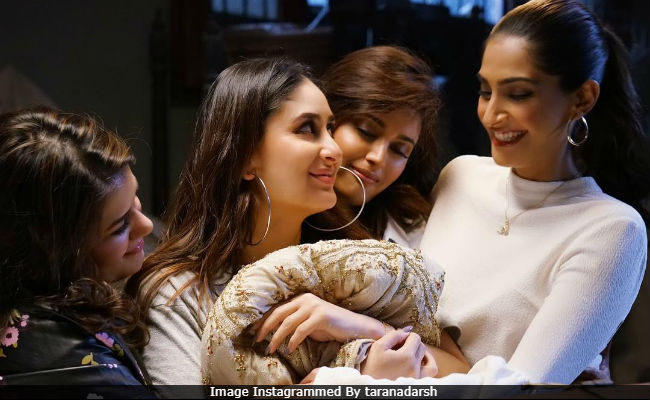 New Delhi: Kareena Kapoor, Sonam Kapoor, Swara Bhasker and Shikha Talsania's Veere Di Wedding has made it to 2018's top five opening weekend list, reports Box Office India. Yes, right on Day 1 even before the last show. "Veere Di Wedding took a good start in the morning shows of 30-35 per cent and is the third best opening in terms of occupancy of 2018 for Hindi films," Box Office India report started. Kareena and Sonam's film ranks #3 with 32.5 per cent, after Tiger Shroff's Baaghi 2 (57.5 per cent) and Deepika Padukone's "Padmaavat" (42.5 per cent). Raazi and Sonu Ke Titu Ki Sweety are also on the top five list.

"The opening of Veere Di Wedding is better than films like Pad Man, Raid, October and Parmanu - The Story Of Pokhran which had leading male stars driving the films. It is also better than Raazi as far as morning shows go but the film will have to be far better than its trailer if it is to match that film after the first day business," Box Office India report stated.

Trade analyst Taran Adarsh reports that Veere Di Wedding has got 'one of the best starts of 2018' and the morning shows started with a bag.

Audience verdict is FINAL... #VeereDiWedding starts with a BIG BANG in morning shows... Noon shows SUPER-STRONG too... Undoubtedly, one of the best starts of 2018.

Promoted
Listen to the latest songs, only on JioSaavn.com
Veere Di Wedding has opened to mixed reviews. It is a film about four friends (or Veeres) who swear by each other and have got each other's back, always. All the four characters are dealing with different situations a woman can face during the course of life.

Veere Di Wedding clashed with Harshvardhan Kapoor's Bhavesh Joshi Superhero. Yes, it was Kapoor Vs Kapoor at the box office. Sonam's film was co-produced by her sister Rhea.