Varun Dhawan and designer Natasha Dalal are childhood buddies, who were photographed together on Valentine's Day this year 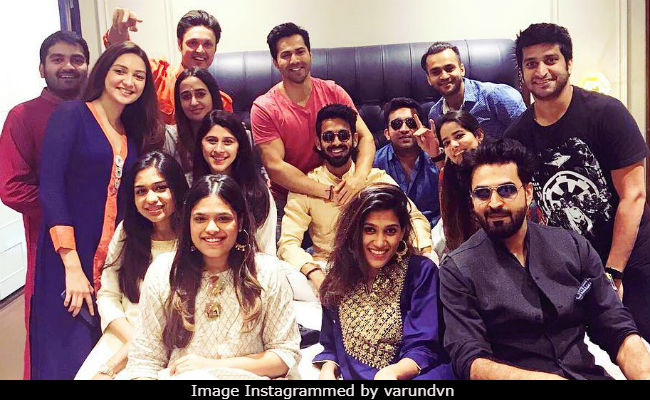 New Delhi: Varun Dhawan has just acquired a new place - a plush apartment, designed by his mother, in Mumbai . The actor hosted a house-warming party recently and invited friends over. We also spotted Varun's rumoured girlfriend Natasha Dalal at the party in a photo shared by Varun on Instagram. In the Instagram post, Varun can be seen posing with his crew of friends, all of who are planted on his new bed. Natasha also features in the photo which was uploaded with the caption: "Home is where your friends are #newbed." This has sort of put another set of speculation - about Natasha and Varun's reported break-up - to rest.

Varun Dhawan and designer Natasha Dalal are childhood buddies, who were photographed together on Valentine's Day this year. Natasha was also Varun's plus-one at Shahid Kapoor's pre-birthday bash earlier this year and the duo are often spotted at dinner dates in Mumbai.

If you need help with identification, the female friend on Varun's right is Natasha.

Home is where your friends are #newbed

A detailed tour of Varun Dhawan's new apartment was recently provided by the actor himself. Anupam Kher, who was one of the guests at Varun's inaugural party, documented and Instagrammed a video of the interiors of the new apartment with Varun as the tour guide. Take a look:

@varundvn gives me an exclusive tour of his new home. Have seen him as a child when his proud father #DavidDhawan used to travel around on a Vespa scooter. Hard work pays. Mom #LaliDhawan has done the interiors. #ProudOfDhawans #Congratulations #LoveAndBlessings #KuchBhiHoSaktaHai

Promoted
Listen to the latest songs, only on JioSaavn.com
Earlier this year, Varun Dhawan addressed the often asked question about his rumoured girlfriend with a smart response. He was asked about his dating life, when he told mid-day: "The day I settle down, I will announce it to the world. I am proud of the special woman in my life and the world should know about her. I don't want to be in news for dating someone. I can understand if something dramatic happens - like Varun gets punched by his girlfriend - and people write about that. But using her to stay in news doesn't work. Besides, I have learnt that gossip is not indicative of someone's popularity; box office figures are."

Varun Dhawan's last movie Judwaa 2 was a blockbuster hit. He's currently prepping for Sui Dhaaga, which will go on floors early next year. He has also wrapped October, his next movie.
Comments
varun dhawannatasha dalal