Uunchai: Parineeti Chopra "Thrilled" To Be Working With Sooraj Barjatya, "The Torchbearer Of India's Family Entertainers" 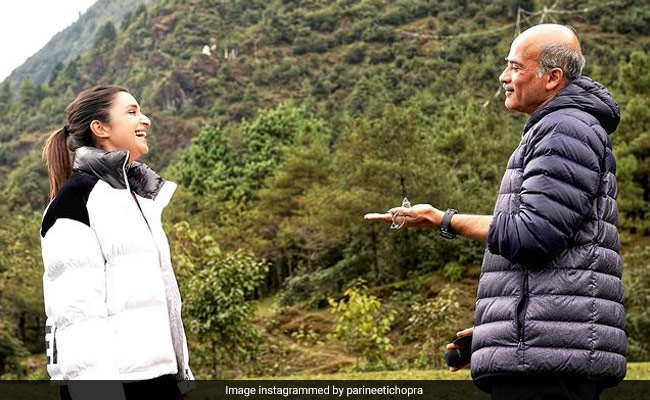 Parineeti Chopra has shared on social media that she will be seen in Sooraj Barjatya's next directorial venture, Uunchai. The actress, who has been on a Maldives vacation for the past few weeks, is in Nepal to shoot for the film. Sharing the news, Parineeti wrote a long note on her social media accounts on Twitter and Instagram. The posts feature candid stills with Sooraj Barjatya. The actress wrote, "Thrilled and honoured to be a part of the iconic cinematic universe of Sooraj Barjatya sir." Parineeti Chopra added, "Sooraj sir has defined and is the torchbearer of India's family entertainers and I can't wait to work under his tutelage; alongside this stellar and incredible cast."

The film has a star cast of veteran Bollywood actors including Amitabh Bachchan, Anupam Kher, Boman Irani, Neena Gupta, Danny Denzongpa and Sarika. Parineeti also took this opportunity to wish Amitabh Bachchan on his birthday. She wrote, "Mr Bachchan, happy birthday sir! This is a special day, and a special moment."

She added, "Especially excited to be working once again with Anupam (Kher) sir, Boman (Irani) sir and Neena (Gupta) ma'am. And for the first time with Sarika ma'am and Danny sir." Parineeti ended her note on a positive note, "Let this magical journey begin."

The actress recently took a well-deserved break with her family in the Maldives. She has also been keeping fans informed of all the happy memories she has been creating on her island getaway.

As part of her vacation, Parineeti Chopra also went on a seven-day scuba diving trip with her brother Shivang Chopra.  And, it was no ordinary experience for Parineeti. The actress called it, "My meditation." Given the way she exudes peace in her Instagram video, we can be sure that she had the time of life in the ocean. Here's her video:

Parineeti Chopra has had three releases this year including badminton player Saina Nehwal's biopic Saina, Sandeep Aur Pinky Faraar and the Netflix original The Girl On The Train. She debuted alongside Arjun Kapoor in the film Ishaqzaade in 2012. In addition to Uunchai, she will also be seen in Animal.