Uri: The Surgical Strike is based on the surgical strikes carried out by the Indian army in 2016 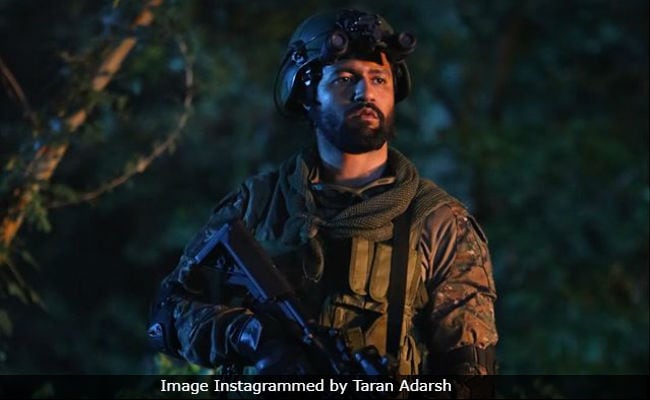 Vicky Kaushal in a still from Uri: The Surgical Strike. (Image courtesy: taranadarsh)

Seems like there is no stopping for Aditya Dhar's Uri: The Surgical Strike. The film which opened in theaters on January 11, has managed to collect over Rs 128.59 crore within 13 days of its release, reports Bollywood trade analyst Taran Adarsh. The film, which stars Vicky Kaushal in the lead role, has not only collected a whopping amount within two weeks of its release, it has also "crossed the lifetime business" of Vicky Kaushal's 2018 film Raazi. That's not it, according to Taran Adarsh, the high-octane action film is also expected to cross Stree and Badhaai Ho's business in its third week. The film collected Rs 6 crore on Wednesday.

Aditya Dhar's film opened to largely average reviews. Film critic Saibal Chatterjee gave the film 2 stars out of five in his review for NDTV. However, he praised the film's lead actor Vicky Kaushal for his performance and wrote: "But for the presence of Vicky Kaushal, whose character desists from overt chest-thumping, Uri: The Surgical Strike would have been a complete washout. It gets two stars - one for its technical sheen, the other for the male lead."

Uri: The Surgical Strike is based on the surgical strikes carried out by the Indian army in 2016. Besides Vicky Kaushal, the film also stars Yami Gautam, Mohit Raina and Paresh Rawal in key roles. Uri: The Surgical Strike clashed with Anupam Kher's The Accidental Prime Minister at the box office and it clearly emerged as a winner.