"Yes, I passed out for a few minutes before the pheras happened," wrote Ekta Kaul 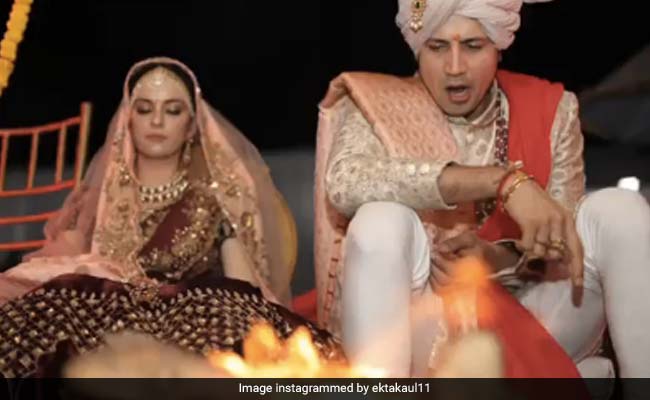 Our day couldn't get any better as we chanced upon a throwback picture of television couple Ekta Kaul and Sumeet Vyas from their wedding and it is hilarious. Ekta, on Monday, participated in an "Ask me anything" session on Instagram and interacted with her fans for a couple of hours. When one of the users asked her to share an unseen picture from her wedding album, she posted a hilarious photo of herself and Sumeet, leaving her fans and us in splits. In the picture, Ekta can be seen taking a nap break while Sumeet can be seen yawing next to her at the mandap. Sharing the photo, Ekta revealed that she dozed off for a few minutes before her wedding pheras started. Replying to the user's request, she shared the photo and wrote: "Here! Also, yes, I passed out for a few minutes before the pheras happened."

Take a look at the screenshot of Ekta Kaul's story here: 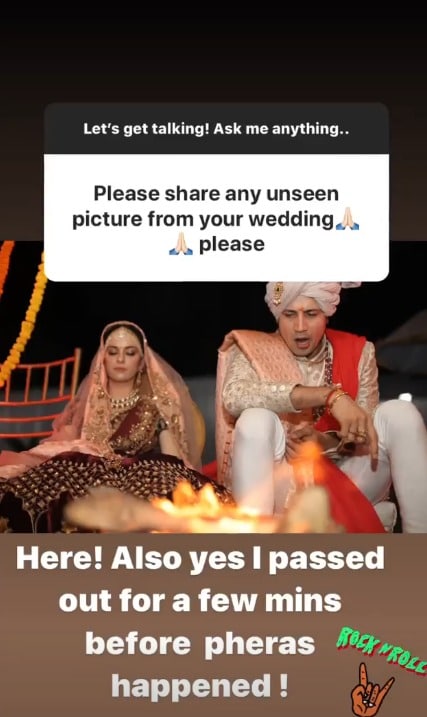 Ekta Kaul and Sumeet Vyas got married on September 15 in the traditional Kashmiri ceremony in Jammu in 2018. Sharing a photo of themselves a day after the wedding, Sumeet Vyas wrote: "Couldn't have been happier..."

Couldn't have been happier... #happilyeverafter @ektakaul11

The couple are expecting their first child soon. They shared the news with their fans on social media earlier this month. Sharing the family picture, Ekta wrote: "Proudly announcing our new project together. Introducing Jr. KaulVyas (soon). Created, directed and produced by us, Sumeet Vyas and I."

Proudly announcing our new project together. Introducing Jr. KaulVyas (soon) Created, Directed and Produced by US.... @sumeetvyas and I

On the work front, Ekta Kaul has worked in TV shows like Rab Se Sohna Isshq, Mere Angne Mein and Bade Achhe Lagte Hain. Sumeet Vyas was last seen in the 2019 comedy-drama Made In China. He has also starred in Veere Di Wedding, alongside Kareena Kapoor, Sonam Kapoor, Swara Bhasker and Shikha Talsania. He is best-known for his performance in TVF's web-series Tripling, Tripling 2 and Permanent Roommates.