'Unforgettable Experience': Rajinikanth Thanks Man Vs Wild's Bear Grylls In A Tweet

"I agreed to finally make my debut on TV after more than four decades of cinema," said Rajinikanth 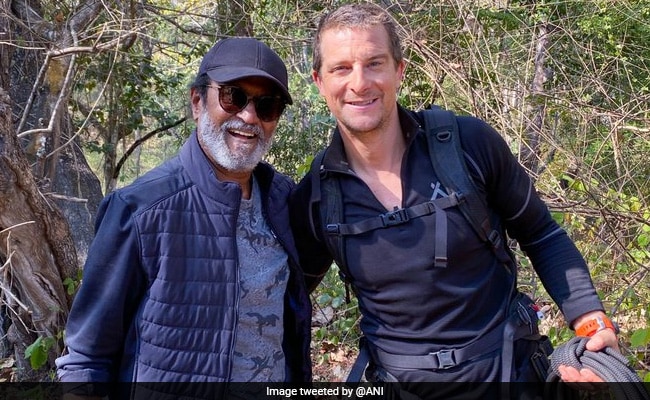 South superstar Rajinikanth, who will be making his TV debut in Discovery series Man vs Wild, thanked host Bear Grylls for an "unforgettable experience" and wrote: "Thank you very much dear Bear Grylls for an unforgettable experience ... Love you... IntoTheWildWithBearGrylls." He also opened up about his first foray into television after an acting career of 43 years and said in a statement: "I agreed to finally make my debut on TV after more than four decades of cinema," reported news agency IANS. The shooting for the Rajinikanth-special episode of the series took place in Karnataka's Bandipur Tiger Reserve on Monday and Tuesday.

Earlier, it was also reported that Rajinikanth suffered minor injuries while shooting in forests around Karnataka's Mysore. However, the actor clarified that he sustained only "scratches due to little thorns" during the shoot. "I have finished shooting for the 'Man vs Wild' episode. I have not received any wounds but some scratches due to little thorns. I am alright," Rajinikanth told media at Chennai airport, reported news agency ANI.

Actor Rajinikanth at Chennai Airport: I have finished the shooting of an episode of 'Man vs Wild'. I have not received any wounds but just scratches due to little thorns, that's it. I am alright. #TamilNaduhttps://t.co/aH8JQfiV9Rpic.twitter.com/mGMOTUGV8k

Rajinikanth and Bear Grylls were permitted to shoot in the ranges of Mulleholle, Maddur and Kalkere, stated a report in The New Indian Express. Rajinikanth is the second Indian to be a part of Bear Grylls' adventure show. Prime Minister Narendra Modi appeared on the show last year in August.

On the work front, Rajinikanth made his acting debut with K. Balachander's Tamil drama Apoorva Raagangal in 1975. However, his breakthrough film was K. Balachander's Moondru Mudichu, which released in 1976. Rajinikanth made his debut in Bollywood with Andha Kanoon (1983) and went on to appear in several other Hindi films such as Chaalbaaz (1989), Uttar Dakshin (1987), Geraftaar (1985) and Hum (1991), in which he co-starred with Amitabh Bachchan. His Tamil and Telugu blockbusters include Thalapathy, Mannan, Annamalai, Veera, Muthu, Padayappa, Petta and Darbar. Rajinikanth will next be seen in Thalaivar 168 .