"Two girls, who are 21-22-years-old, if at this stage we start comparisons then it's not fair," Karan Johar said 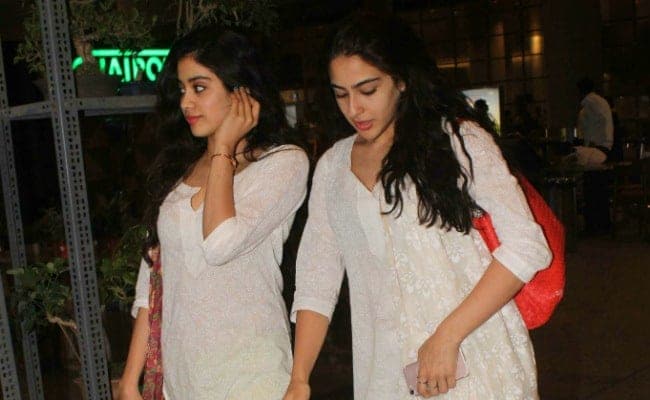 Janhvi Kapoor and Sara Ali Khan photographed together in Mumbai

Filmmaker Karan Johar, who has produced both Janhvi Kapoor's debut Dhadak and Sara Ali Khan's second feature Simmba, says it is "unfair" to compare the two young actors. Janhvi, daughter of late actor Sridevi and producer Boney Kapoor made her debut with the Sairat Hindi remake, while Sara, daughter of Saif Ali Khan and Amrita Singh, has two back-to-back releases -- Kedarnath and Rohit Shetty's Simmba, which is co-produced by Karan.

When asked, who between the two would get more awards, Karan told reporters, "Two girls, who are 21-22-years-old, if at this stage we start comparisons then it's not fair. Both of them are wonderful, beautiful and they work very hard... Awards will never matter. The work they do, the love they get from people is every award."

Karan was speaking at the trailer launch of Simmba, which he has co-produced. The cop-action-drama features Ranveer Singh and Sara.

Karan said he has been waiting to collaborate with Rohit for the longest time and feels glad it finally happened with Simmba.

"Rohit Shetty school of cinema is unabashed, unapologetic and in your face in the best possible fashion. His conviction is paramount and films are universal. I would say he is India's most mainstream filmmaker that there is or there might ever be," he said.

Simmba features a special song with the Golmaal team and in the track, Karan also makes an appearance.

"I wanted to give one hit film as an actor and I requested if he could take me in his film so that I would get a hit! I just wanted to remove the misconception that my films as an actor don't work," the filmmaker quipped.