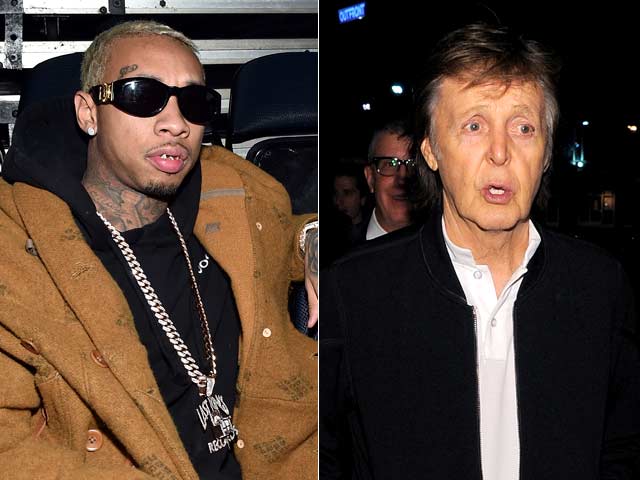 Los Angeles: Rapper Tyga has offered to personally escort Sir Paul McCartney to an upcoming show after the Beatles legend was turned away from the former's after-Grammy party.

Sir Paul was trying to enter Tyga's party in Los Angeles after the Grammy Awards on Monday night when a bouncer insisted that he was not on the guest list. (Also Read: Paul McCartney Not Allowed Into Tyga's Grammy Party. Strange Days Indeed Written By: Gitanjali Roy | February 17, 2016 09:43 IST (New Delhi))

Clearly unaccustomed to such indignities, Sir Paul sounded dumbfounded. He was accompanied by alternative rock icon Beck, who won last year's Grammy for Album of the Year, and Foo Fighters drummer Taylor Hawkins.

"How VIP do we got to get?" Sir Paul told the doorman in an exchange caught on video released by the celebrity news website TMZ.

Tyga, the California rapper whose biggest hit, Rack City, went to number seven on the Billboard chart -- later voiced regret, saying that he was not in charge of the guest list.

"I had no knowledge. I was performing inside," he told comedian Jimmy Kimmel during an interview.

Now, Tyga has invited Sir Paul for his show in Los Angeles on February 26.

"Paul, if you're watching this, I would love for you to come," he said. "I'll personally walk you in."

"Oh yeah. He's not going to fall for that again," quipped Jimmy Kimmel.