Twinkle Khanna's Daughter Nitara Is 'Just Like Her.' She Explains With A Pic 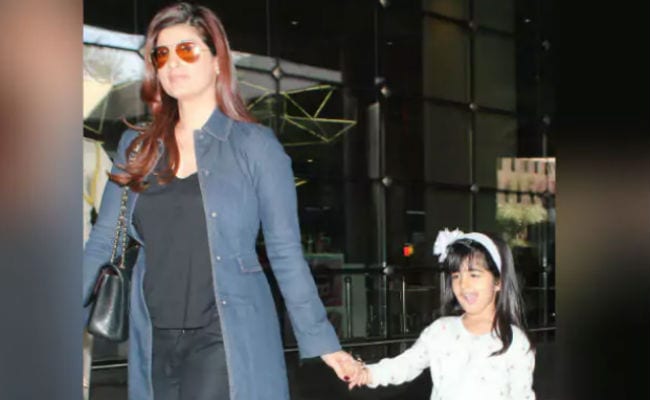 New Delhi: Columnist Twinkle Khanna posted a picture of daughter Nitara reading Frankenstein and revealed that she's 'just like her.' She captioned Nitara's picture as, "The baby likes gory stories and pop-up books just like her mother #Frankenstein." This isn't the first time Twinkle has shared something about Nitara. Months ago, she posted about a conversation with five-year-old Nitara, which left her 'zapped.' The hilarious conversation goes like this: "Baby: My legs are hurting too much! Me: You are becoming big, these are called growing pains. Baby: Oh so this is just part of life?'" "Zapped," wrote Twinkle. (Nitara amused us with her words just like her mother).

Baby:My legs are hurting too much! Me:You are becoming big,these are called growing pains. Baby:Oh so this is just part of life?' #zapped

On Karan Johar's chat show Koffee With Karan, Akshay had also revealed that their daughter Nitara is just like Twinkle.

Both Twinkle and Akshay are quite active on social media and they often delight everyone by sharing posts featuring their kids. On Valentine's Day, Akshay shared a picture with Nitara and wrote, "Feeling on top of the world with my favourite girl."

Feeling on Top of the World with My Favourite Girl #HappyValentinesDay

Promoted
Listen to the latest songs, only on JioSaavn.com
When Nitara Nitara 'doubled' her mother's work.

Twinkle Khanna gave up an acting career to be an interior designer and, now, she's a best-selling author. She turned a film producer this year with Akshay's PadMan, which released a couple of Fridays ago. In the film, Akshay plays entrepreneur Arunachalam Murugunantham, who invented low-cost sanitary pad making machines and created menstrual hygiene in his village. He co-stars with Sonam Kapoor and Radhika Apte in PadMan.
Comments
Twinkle Khannatwinkle khanna nitaratwinkle khanna akshay kumar