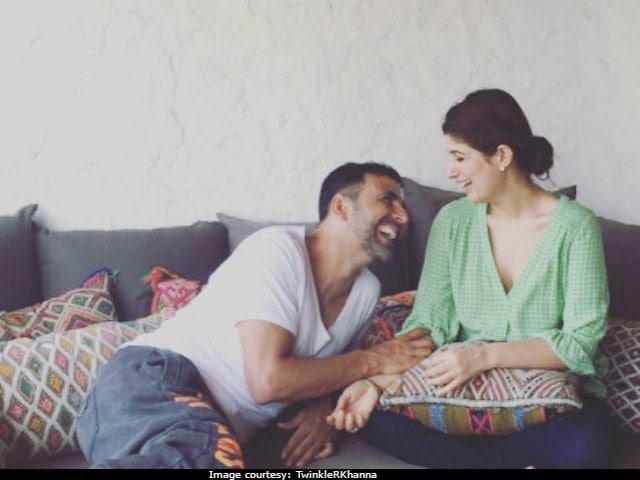 New Delhi: Happy anniversary, Twinkle Khanna and Akshay Kumar. We learnt from a hilarious tweet posted by Twinkle that she and 'Mr K' (as Akshay is referred to in her tweets and columns) have survived "16 years of trying to kill each other." They 'haven't succeeded' yet. If we may, our money's on her, despite Mr K's martial arts skills - just look at Akshay's grimace in the video clip Twinkle attached to her tweet. We dare you to not laugh. Twinkle Khanna, 43, and Akshay Kumar, 49, met as young actors. The 'partners in crime' married in 2001 and have a son and daughter, named Aarav and Nitara. Here's the tweet Twinkle Khanna posted:

16 years of trying to kill each other and we still haven't succeeded:) #16thanniversary#partnersincrimepic.twitter.com/XqGWQ2BQAI

For a moment there, we forgot that it's not even midweek.

Twinkle Khanna, a former actress, has reinvented herself as a best-selling author and columnist. Her Twitter account, which she operates under the handle @MrsFunnyBones, is hugely popular and she's adored for her irreverent sense of humour. Twinkle and Akshay, who has admitted he's sometimes made nervous by her outspokenness, appeared together on filmmaker Karan Johar's chat show Koffee With Karan last year. The couple revealed that Akshay's code for telling Twinkle to zip it are the words "Chashma pehen le."

Promoted
Listen to the latest songs, only on JioSaavn.com
Seems to us Twinkle Khanna rarely takes her husband's advice, on Twitter or off it. She recently posted a wickedly funny tweet about 'monosodium glutamate' - a reference to new neighbor Gurmeet Ram Rahim, the Dera Sacha Sauda head who has starred as 'MSG' or 'Messenger of God' in a series of films. Told by a follower that should consider a political career, Twinkle summed up her own lack of a filter as:

Jeez that's a suicide mission- I would end up saying things that would blow up on my face they would not even need to assassinate me :) https://t.co/WJYQ7HlpHO

Twinkle Khanna, daughter of actors Rajesh Khanna and Dimple Kapadia, co-starred with Akshay Kumar in Nineties films like International Khiladi and Zulmi. She recently released her second book and will produce a film starring her husband this year. Akshay Kumar had a bumper 2016 with the films Airlift, Rustom and Housefull 3. He has Jolly LLB 2, Toilet: Ek Prem Katha and Rajinikanth's 2.0 coming up this year.