Twinkle Khanna Shares Photo Of Akshay Kumar With Daughter Nitara. Seen It Yet? 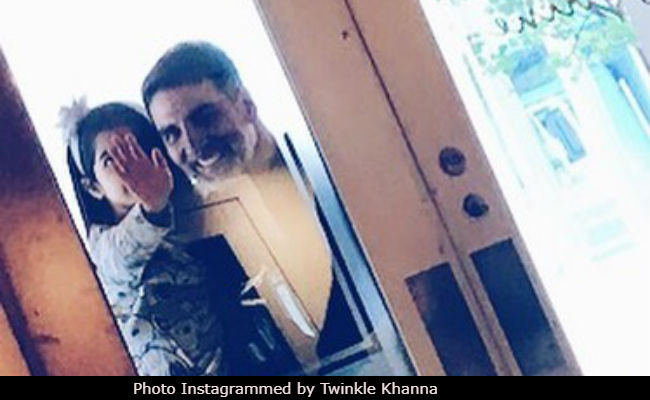 On a Sunday morning, nothing could be better than waking up to a cute photo of little Nitara and her father Akshay Kumar. Thanks to Twinkle Khanna, who shared such an adorable photo of the duo with her Instafam. Twinkle captioned the photo: "So much more than just window-dressing but I must admit the tall man is easy on the eyes as well. Window of opportunity." In the photo, Akshay Kumar can be seen holding Nitara in his arms and her face is partly covered with her hands. Akshay Kumar and Nitara can be seen outside the window of a shop and it appears that the photo has been clicked by someone inside.

The comment section is flooded with words like, "When your happiness is in your arms," and "My heart is melting like a chocolate." We chanced upon more such adorable comments like," Both are love," Papa beta love," and "Super cute." Here's the photo shared by Twinkle Khanna.

So much more than just window-dressing but I must admit the tall man is easy on the eyes as well :) #windowofopportunity

Twinkle Khanna's daughter Nitara often features on her Instagram posts. When Twinkle was on a vacation with her family, she shared a slew of photos, which also featured her 5-year-old daughter.

Every summer either I find The Little Prince or he finds me! The baby is thrilled to chance upon our favourite book in our hotel room #TheLittlePrince #bookworms

Earlier this year, Twinkle Khanna had shared a photo with Nitara and captioned it: "When you love someone so deeply that you see all your tomorrows strung together in their eyes." The picture featured Twinkle and Nitara looking at each other and the little one seemed to be shushing her mother.

Twinkle Khanna married Akshay Kumar in 2001 and are parents to Aarav, 17 and Nitara. Twinkle Khanna, a former actress, is a best-selling author and she recently launched her third book Pyjamas Are Forgiving. Twinkle is also a celebrated columnist, interior decorator and a film producer.