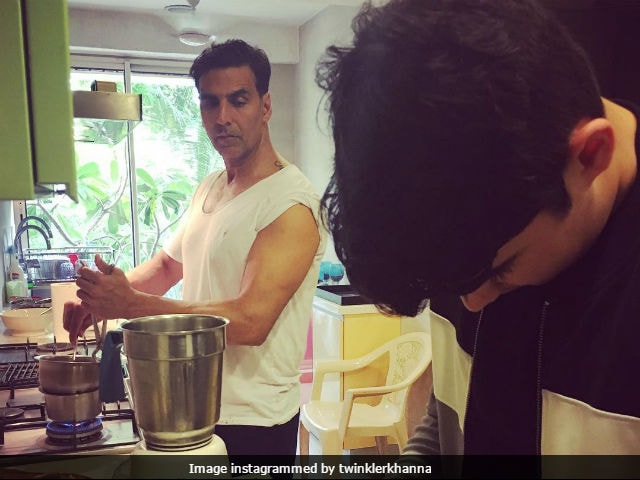 New Delhi: Twinkle Khanna delighted all her fans and followers on social media by sharing a picture featuring her husband, actor Akshay Kumar and their son Aarav. In the picture, the 49-year-old actor can be seen preparing a dessert for guests along with his son in the kitchen. As Aarav breaks the egg, Akshay looks at him intently. The picture is really heartwarming. Twinkle Khanna has captioned the image as, "Father and son busy making souffle and layered white chocolate mousse for our dinner guests. I have trained my boys well :) #dessertstory #sundayshenanigans." Akshay Kumar and Twinkle Khanna have been married for over 16 years. They also have a daughter Nitara, 4. The couple often shares delightful post featuring their kids.

Last week, Twinkle Khanna shared a parenting woe on Twitter. In her post, she wrote that she was contemplating to chop off daughter Nitara's hair as she refused to get them trimmed and she had readymade scapegoat on whom she could place blame. "The baby refuses to trim her hair! Should I snip it at night and blame the braid chopping entity who it seems has now moved to Mumbai as well?," tweeted Twinkle.

The baby refuses to trim her hair!Should I snip it at night & blame the braid chopping entity who it seems has now moved to bombay as well?

Twinkle is the daughter of actors Rajesh Khanna and Dimple Kapadia. She is former actress, who has featured in films like Baadshah, Joru Ka Ghulam, Itihaas, Jab Pyaar Kisise Hota Hai and Mela.

Twinkle Khanna quit acting in 2001. She is now an author (Mrs FunnyBones and The Legend Of Lakshmi Prasad), columnist, interior designer and producer.

Twinkle has co-produced films like Patiala House and Holiday: A Soldier Is Never Off Duty, both starring Akshay Kumar.