Twinkle Khanna tweeted: "The baby refuses to trim her hair! Should I snip it at night and blame the braid chopping entity" 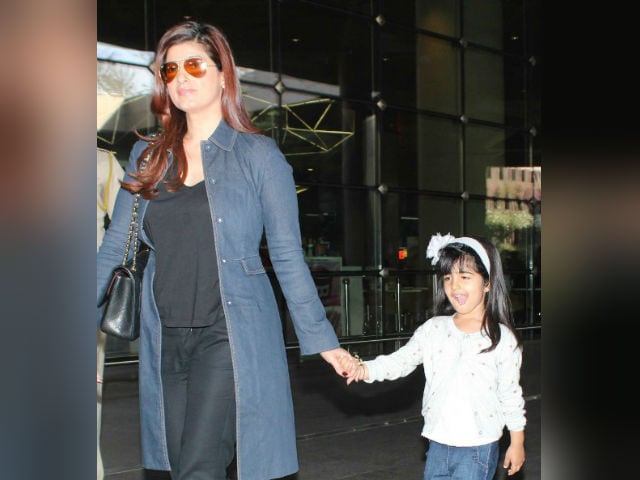 Twinkle Khanna with Nitara in Mumbai

New Delhi: Twinkle Khanna is putting the 'funny' in her Twitter handle MrsFunnyBones again. But this time, folks don't entirely approve. On Wednesday, Twinkle shared a new parenting woe (now, her daughter Nitara won't agree to have her hair trimmed) and also a solution, for which she has a readymade scapegoat on whom to place blame. You know the mysterious braid-chopping incidents across North India? Those. Twinkle tweeted: "The baby refuses to trim her hair! Should I snip it at night and blame the braid chopping entity who it seems has now moved to Mumbai as well?" Better hold onto your hair, Nitara. Twitter is on your side.

Barely had Twinkle tweeted than social media erupted with reactions. Some giggled while a lot of others think it's no laughing matter. A Twitter user wrote in comments, "Please don't distress the baby" while another added, "Trust is primary. It's just hair."

The baby refuses to trim her hair!Should I snip it at night & blame the braid chopping entity who it seems has now moved to bombay as well?

Here are some reactions:

Please don't dis-tress the baby. Her grandma will be displeased for sure

No, keep trying it will be better policy in long term

One person said that this may give Nitara 'nightmares' but totally lost track by suggesting Twinkle should bribe her daughter into a haircut with candy (facepalm).

Cutting her hair while she's asleep may give her nightmares. Have you tried offering her favorite candies or toy that she would agree on?

There were others who gave Twinkle Khanna some suggestions on how to tackle the hairy problem.

Get a bald barbie and suggest she donates her hair for her wig and pray she does not have your smart wit!

One follower warned Twinkle of media intervention in case of 'braid chopping':

Expect news channels at your door step next morning

Twinkle Khanna is married to actor Akshay Kumar. Their daughter Nitara is all of four-years-old and has an elder brother, Aarav, who is 14.

Twinkle is a former actress and has made films like Mela with Aamir Khan, Jab Pyaar Kissi Se Hota Hai with Salman Khan and Badshah with Shah Rukh Khan. Twinkle Khanna quit acting after 2001 film Love Ke Liye Kuch Bhi Karega. She has co-produced films like Patiala House and Holiday: A Soldier Is Never Off Duty.

Promoted
Listen to the latest songs, only on JioSaavn.com
Twinkle recently launched her own production house named Mrs FunnyBones Movies and the first film made under the banner will be Akshay's Padman. The film is directed by R Balki and also stars Sonam Kapoor and Radhika Apte. Meanwhile, Akshay Kumar is awaiting the release of Toilet: Ek Prem Katha this Friday.

Twinkle Khanna is the author of Mrs FunnyBones (a collection of her columns) and The Legend Of Lakshmi Prasad.