Twinkle Khanna Plays 'The Mother Card' To Get Son Aarav Click Her Pic. Here's The Story 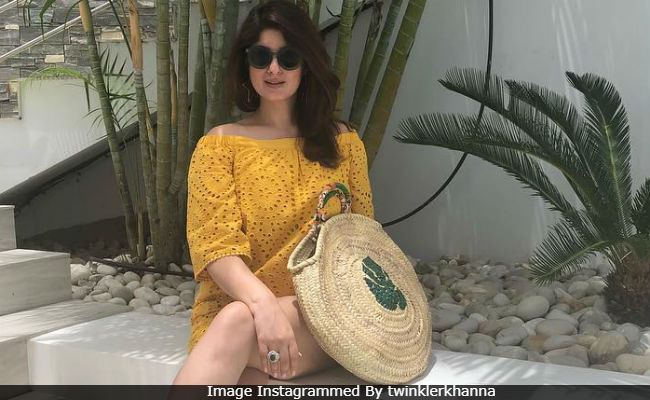 Twinkle Khanna is filling up her vacation album with some wonderful pictures and she has just added one more to it this evening. This one's might be special for her, as she has been clicked by son Aarav. Twinkle looks beautiful in the picture, in which she is seen wearing a short yellow dress. With the picture, her caption for it should not be missed too. (Like always). The story behind it goes like this - "Forcing the prodigal son to take my pictures is an art. I have to keep reminding him that these are just small ways he can pay me back for carrying him inside my body for 9 months #TheMotherCard." (ROFL)

Take a look, folks. This is how Twinkle Khanna looks in the million dollar picture clicked by Aarav.

Twinkle Khanna, Akshay Kumar and children Aarav and Nitara were vacationing in New York and they recently seem to have checked into London, where they watched a show at the West End.

Caught #Wicked the musical at #TheWestEnd and what a WICKED performance it was! Hats off to the unbelievable effort these incredibly talented women put on stage. I'd be dead if I had to work as hard as them. #Respect

Akshay returned to Mumbai in the afternoon to resume his work commitments while Twinkle and kids seem to have extended their holiday.

Here are some of the pictures from Twinkle Khanna's vacation diary.

I thought these were just plain,white glasses but the teens in our group inform me that these are called 'clout' or soundcloud rapper glasses - Gen Z seems to know a lot about nothing :) #TryingtoKeepUpWithGenZ #clout

Promoted
Listen to the latest songs, only on JioSaavn.com
Meanwhile, Twinkle also announced that she has completed her third book.

Now that I have finally finished book No. 3- my glass is half-full indeed! P.S the fab tunic is one of the perks of having @bindyany as my bestie :) #AllWorkAndNoPlayNoMore

Twinkle Khanna gave up an acting career to be an interior designer and, now, she's a best-selling author. Her previous two books are - Mrs Funnybones and The Legend of Lakshmi Prasad.

Akshay Kumar, 50, and Twinkle Khanna, 43, have been married since 2001. Akshay was last seen in PadMan, produced by Twinkle. His upcoming releases is Gold.