Tumhari Sulu Motion Poster: Is It A Bird? Is It A Plane? No, It's Vidya Balan 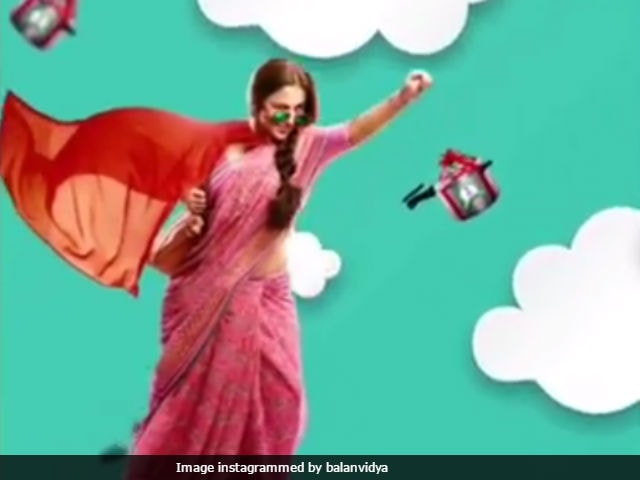 A still from the motion poster of Tumhari Sulu (Image courtesy: balanvidya)

New Delhi: The makers of Tumhari Sulu, starring Vidya Balan, have unveiled the motion poster of the movie today, announcing that the teaser of the film will be released on Thursday. The motion poster features Vidya Balan as a superhero, who is seen flying with several neatly wrapped pressure cookers in the background. The 38-year-old actress is dressed in a pink sari which has been paired with a red cape. "Aapki Raaton Ko Jagaane ... Aa Rahi Hai #TumhariSulu #TeaserTomorrow #MainKarSaktiHai," read the caption of the motion poster. Tumhari Sulu has been directed by noted ad film-maker Suresh Triveni and produced under the banners of T-Series and Ellipsis Entertainment.

Vidya Balan will feature as a radio jockey Sulochana aka Sulu in the movie.

See the two posters of Tumhari Sulu which were unveiled earlier.

Tumhari Sulu will have a reprised version of the popular song Hawaa Hawaai from the movie Mr India, starring Anil Kapoor and Sridevi.

In an interview with news agency PTI, Vidya Balan said, "Tumhari Sulu is a fun film. Sulu is a late night RJ and it will unleash the naughty side of me."

Director Suresh Triveni talked about Vidya's character in the film in an interview with news agency IANS and said, ""The character of Sulu is fun, happy-go-lucky and grounded, everything that Vidya is even in real life."

"The film has been handcrafted for Vidya and to have her as a lead in my first feature is an honour. I look forward to seeing the story come alive as I have lived with it for almost a year now," Mr Triveni added.

Promoted
Listen to the latest songs, only on JioSaavn.com
Tumhari Sulu is slated to release in theatres on December 1.