Tribhanga Trailer: In Kajol, Tanvi Azmi And Mithila Palkar's Film, "Nobody Is Perfect" 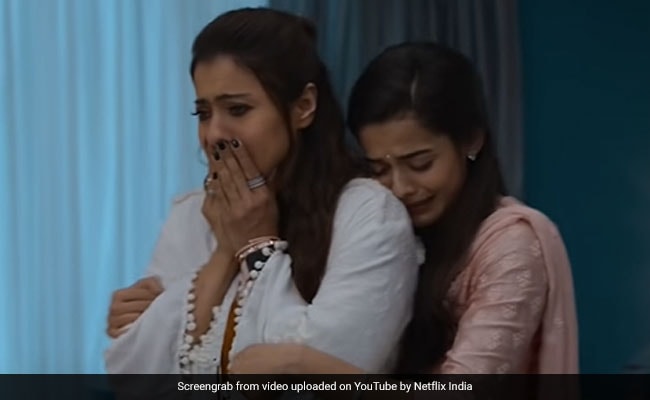 Tribhanga Trailer: Kajol and Mithila Palkar in a still from the film. (Image courtesy: YouTube)

The trailer of Kajol, Tanvi Azmi and Mithila Palkar's film Tribhanga released on Monday and it promises a gripping story about three women, who are not "perfect" but they live their lives on their own terms. Tanvi Azmi stars as Kajol and Mithila Palkar's mother in this Renuka Shahane-directed film that explores dysfunctional family dynamics. The trailer shows Nayan (Tanvi Azmi), a critically acclaimed Marathi litterateur, admitted to a hospital after she slips into a coma and Anu (Kajol) revisiting her sour memories of her mother, with whom she shares an estranged relationship. Sharing the trailer of the film, Kajol summed up the story with these words: "Nobody is perfect."

Watch the trailer of Tribhanga here:

Tribhanga, which is the name of an Odissi dance pose, marks Kajol's digital debut. Talking about her character in the film, the actress said in a statement: "We need to embrace these imperfections and live on our own terms, just the way Nayan, Anu, and Masha do in this film. My character is outspoken and opinionated much like how the audience knows me, yet is completely different. As a mother, I can vouch that there are challenges that women face daily as the smallest of things we do affect our children. Motherhood is a minefield of emotions captured extremely well by Renuka. I am very excited for the audience to see this film and hope it will resonate with people of all ages," reported news agency PTI.

Renuka Shahane has tried to use Tribhanga dance pose as a metaphor to represent the women in this film "who have their own quirks and idiosyncrasies, and yet are fascinating, beautiful and vibrant," reported PTI.

"I wanted to capture the dysfunctional family dynamics when the core, the relationship with the mother, is shaky and unstable. I added three different generations to better reflect the intergenerational perspective in looking at the same event in three different ways," the actor-director said in a statement, reported PTI.