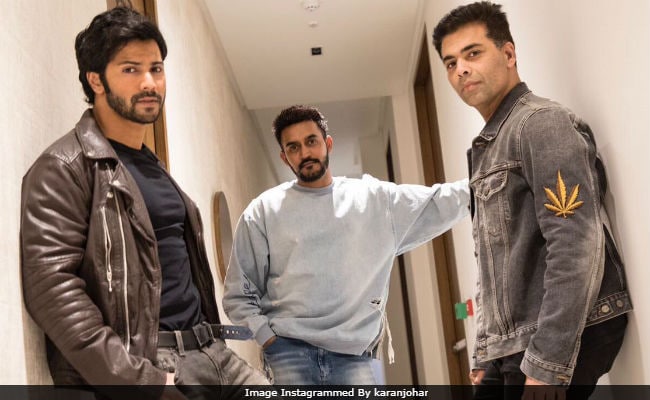 New Delhi: Actor Varun Dhawan has collaborated for the third time with his Badrinath Ki Dulhania director Shashank Khaitan for a new film, titled Rannbhoomi. The announcement was first made by filmmaker Karan Johar on Monday morning and Varun Dhawan and Shashank Khaitan followed it up with their social media posts. Karan Johar's Dharma Productions is producing Rannbhoomi, after Varun and Shashank's Humpty Sharma Ki Dulhania and Badrinath Ki Dulhania. "Rannbhoomi. @shashankkhaitan and @varundvn take a giant leap in their third offering together!! DIWALI 2020 release! This is a solid spectacle with a beating heart!" wrote Karan Johar, adding a picture with Varun and Shashank. The final cast will be announced soon. Rannbhoomi is scheduled for a Diwali 2020 release.

#RANBHOOMI!! @shashankkhaitan and @varundvn take a giant leap in their third offering together!! DIWALI 2020 release! This is a solid spectacle with a beating heart! @dharmamovies @apoorva1972

"Rannbhoomi is Shashank's colossal and ambitious imagination to attempt a hat-trick with Varun and Dharma. Shashank and Varun make an epic blend of creative and commercial extravaganza and that is exactly what Dharma Productions' vision for the coming few projects is. Very excited to bring them together again for this Diwali 2020 epic tale," Karan Johar said in a statement.

Badrinath Ki Dulhania (2017) was a sequel to Humpty Sharma Ki Dulhania. Both the films were directed by Shashank Khaitan and starred Varun opposite Alia Bhatt.

#RANNBHOOMI. Diwali 2020. A warrior will rise.@karanjohar@ShashankKhaitan@DharmaMoviespic.twitter.com/sgzwzpMPj0

Shashank Khaitan revealed that he started working on Rannbhoomi's story in 2015.

#Rannbhoomi ... A story I started working on in December 2015... thank you for giving this dream wings @karanjohar ... Excited to collaborate with my friend and my star @Varun_dvn ... @apoorvamehta18@DharmaMoviespic.twitter.com/9ojfwKfQ63

Varun Dhawan was launched in Bollywood by Karan Johar with 2012's Student Of The Year. The film also starred Alia and Sidharth Malhotra and marked the trio's Bollywood debut.

Promoted
Listen to the latest songs, only on JioSaavn.com
Karan Johar is currently attending the Berlin Film Festival. Shashank Khaitan is making Dhadak, another Dharma Productions film, with Janhvi Kapoor and Ishaan Khatter. Janhvi is Sridevi and Boney Kapoor's elder daughter and Dhadak is her debut Bollywood film. Dhadak is a remake of Marathi blockbuster Sairat.

Varun Dhawan has two major releases lined-up for this year - YRF's Sui Dhaaga and Shoojit Sircar's October. In Sui Dhaaga, he stars opposite Anushka Sharma. October casts him opposite Banita Sandhu, who is making her Bollywood debut.