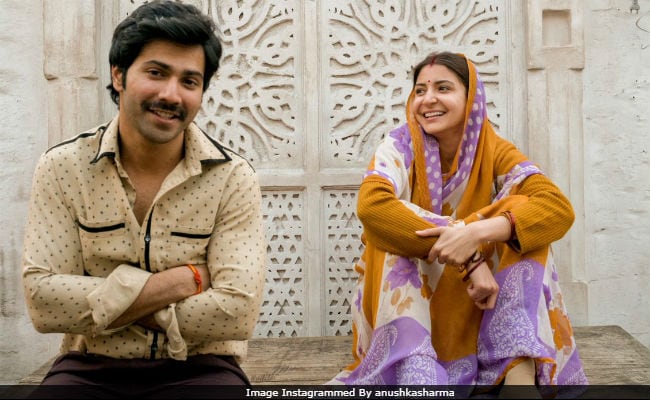 New Delhi: The first look of Anushka Sharma and Varun Dhawan's forthcoming film Sui Dhaaga was unveiled last night. Anushka plays Mamta while Varun stars as Mauji in the film. In the poster, Anushka and Varun are all smiles and look like a perfect couple from a small town. Anushka is seen wearing a sari and perfects her look with a small bindi and sindoor. Varun's sports a moustached look and is wearing a cream-coloured shirt along with brown trousers. Sui Dhaaga is Anushka and Varun's first film together. "Mamta aur Mauji aa rahe hain 28 September ko," Anushka wrote while sharing the first look on social media. Varun also shared a picture of them from the film. Sui Dhaaga is directed by Sharat Katariya.

A few days ago, a picture of Anushka from the sets of Sui Dhaaga went viral.

Both Anushka and Varun regularly posted updates on their preparations for the film.

Sui Dhaaga is based on the ideology of Make In India. On Gandhi Jayanti, the actors revealed details about their film. "A dream, #MadeInIndia. He made it happen for us. Team Sui Dhaaga bows down to Mahatma Gandhi," Varun tweeted along with a video.

Of the film, Varun earlier told news agency PTI, "From Gandhiji to Modiji (Narendra Modi), our country's leaders have always endorsed the mantra of Made in India. With Sui Dhaaga, I am proud to take their message to millions of movie lovers in a manner that is entertaining and relevant. I really liked the script Sharat had written and I am happy that I am teaming up with YRF on this movie. Anushka and I are teaming up for the first time so I am sure there will be fireworks."

While Anushka Sharma said, "It's a story of self-reliance that I believe will connect with every Indian. And I am really looking forward to work with Varun and the team of Maneesh and Sharat."

Promoted
Listen to the latest songs, only on JioSaavn.com
Sui Dhaaga is slated to release on September 28.