Sara Ali Khan and Kartik Aaryan are currently filming with the team in Himachal Pradesh. 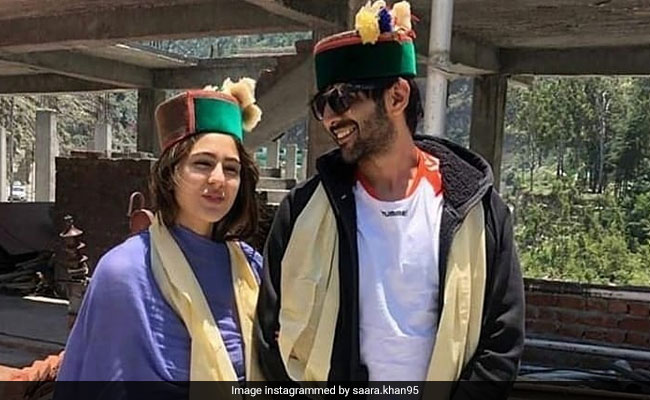 Pictures from the sets of Sara Ali Khan and Kartik Aaryan's upcoming film Love Aaj Kal 2 have found a spot on the list of trends after they were circulated by fan clubs on social media over the weekend. Sara and Kartik, who co-star in Imtiaz Ali's movie, are currently filming with the team in Himachal Pradesh and they seem to have adapted to the local life quite well. Several pictures from the sets of the film show Sara and Kartik accessorising their respective looks with fancy Himachali caps. Sara Ali Khan and Kartik Aaryan are all smiles as they posed for pictures. In some photos, they can be seen seated together against a picturesque backdrop.

Here are trending pictures from the sets of Love Aaj Kal 2:

Sara Ali Khan started her career in Bollywood with Abhishek Kapoor-directed Kedarnath, which was closely followed by her second film Simmba, directed by Rohit Shetty. Love Aaj Kal 2, in which her father Saif Ali Khan reportedly has a cameo, is her third film. Saif Ali Khan headlined Imtiaz Ali's 2009 film Love Aaj Kal with Deepika Padukone. After wrapping Love Aaj Kal 2, Sara Ali Khan will start filming Coolie No 1 with Varun Dhawan. The film is expected to go on floors in August in Thailand followed by a schedule in Goa.

Meanwhile, Kartik Aaryan, who burst into the Bollywood scene with films like the Pyaar Ka Punchnama series and Sonu Ke Titu Ki Sweety, was last seen in Luka Chuppi while he has also signed up for the remake of Pati Patni Aur Woh, co-starring Ananya Panday and Bhumi Pednekar.