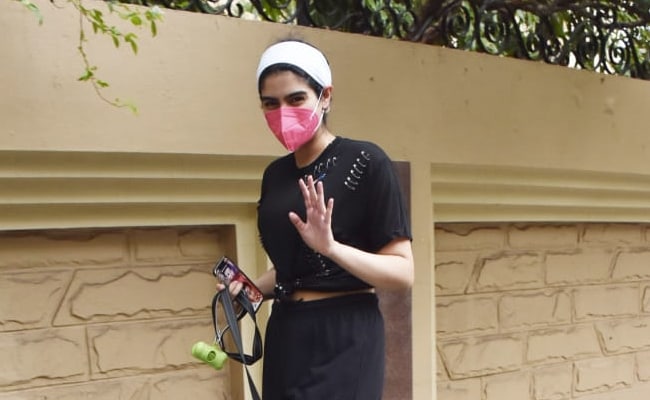 Khushi Kapoor pictured outside her apartment in Mumbai

A day after Cyclone Tauktae brought the highest ever rainfall in Mumbai in May, Khushi Kapoor went on a walk outside her apartment premises with her pet Yorkshire Terrier named Panda. Khushi Kapoor was spotted by the paparazzi on her way back, who asked for pictures and she obliged. Wearing her face mask, Khushi waved at the shutterbugs before making her way inside the apartment gates and she was pictured with her phone in one hand. Meanwhile, the Internet couldn't help but notice that Khushi's wallpaper is a childhood throwback, featuring mom Sridevi and a baby version of herself. Khushi is the youngest of late actress Sridevi and filmmaker Boney Kapoor's two daughters. Khushi's sister Janhvi Kapoor is an actress.

Here are the viral photos of Khushi Kapoor, which offer a glimpse of her phone wallpaper.

Khushi's phone screensaver is actually a throwback photo, which she posted on Sridevi's birth anniversary last year. "Miss you," she had written. Sridevi died in 2018 after accidentally drowning in a hotel bathtub in Dubai, where the Kapoors were attending the wedding festivities of Mohit Marwah. Sridevi was 54.

In April 2018, photos of Khushi Kapoor's phone resurfaced on the Internet and looks like it she had the same wallpaper three years ago as well.

Just months after Sridevi's death, Janhvi Kapoor attended the National Awards wearing one of her mother's kanjeevaram saree. Sridevi was posthumously honoured with the Best Actress National Award for her role in MOM.

Khushi Kapoor is currently studying film in New York - she recently flew back to Maximum City. Janhvi Kapoor will next be seen in Dostana 2.