"These pictures spell love and mean the world to me," wrote actor Sunny Singh 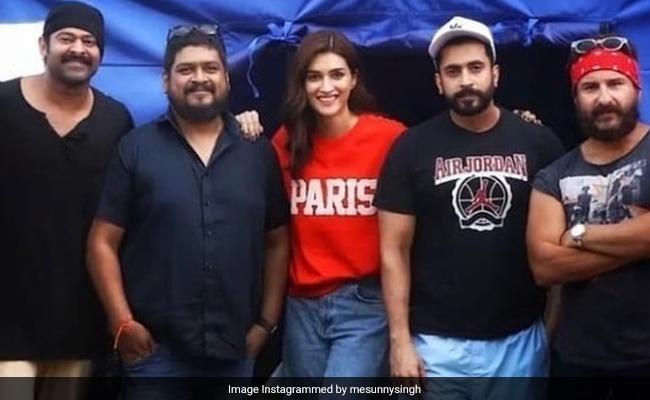 And it's a wrap for Adipurush - the Om Raut-directed film co-starring south star Prabhas and Saif Ali Khan in the lead roles. The film also stars Kriti Sanon and Sunny Singh in pivotal roles. On Thursday, Sunny Singh shared a set of pictures from the film's wrap party featuring himself, Prabhas, Saif Ali Khan and Kriti Sanon. Along with the pictures, he wrote a heartwarming note about "memories and experiences of a lifetime: "These pictures spell love and mean the world to me! Speak volumes of a bond shared, my dad came to visit us on the set on the last day of our shoot. Can't believe this beautiful journey of #Adipurush has come to an end. A journey that taught me so much and left me with memories and experiences of a lifetime. Thank you, Om Sir for everything. #103days #adipurush."

The pictures from Adipurush wrap party have been trending incessantly on Twitter. Check them out here:

Adipurush stars Prabhas as protagonist Adipurush and Saif as the villain named Lankesh. As per the makers, the film "celebrates the victory of good over evil." Adipurush will release in Hindi, Tamil, Telugu, Kannada and Malayalam in theatres.

In the past, Sunny Singh has shared several pictures from the sets of Adipurush featuring Prabhas. Take a look:

Previously, talking about his role in Adipurush, Prabhas said in a statement: "Every role and every character comes with its own challenges but portraying a character like this comes with tremendous responsibility and pride. I am very excited to portray this character of our epic, especially the way Om Raut has designed it. I am sure the youth of our country will shower all their love on our film."

The film is slated to release in August next year.