Trending: Navya Naveli Nanda Danced To Dilliwali Girlfriend Like Nobody Was Watching 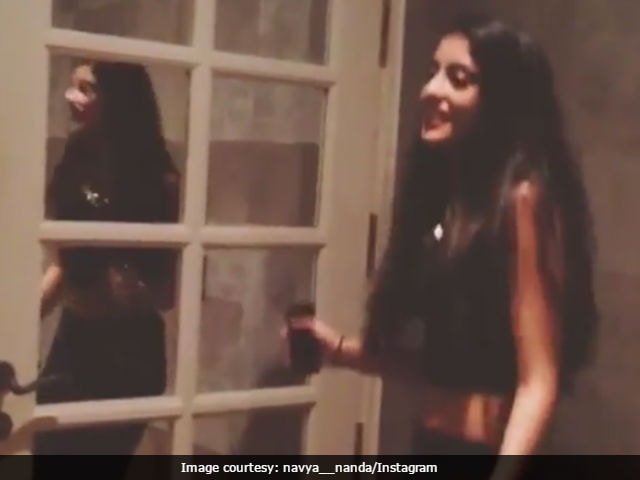 New Delhi: Amitabh Bachchan's granddaughter Navya Naveli Nanda is sending social media into a meltdown yet again. This time courtesy a goofy video made Navya's friend in which she's dancing to Ranbir Kapoor's song Dilli Wali Girlfriend. Navya, who is based out of Delhi, is dressed in black leggings and crop top as she happily dances around while the song plays in the background. Navya's friend can be heard saying: "Navya's private show in the massage room." Navya is the daughter of Shweta and Nikhil Nanda and her younger brother is Agastya Nanda. Watch Navya Naveli dance like no one's watching in this video.

Navya Naveli graduated from London's Sevenoaks School this year and nothing about her future aspirations - in Bollywood or otherwise - has been known so far. Shweta, who belongs to a family of actors, earlier said that she'd be worried if her daughter wanted to pursuit a career in Bollywood. "I will be worried if (Navya Naveli) plans to be an actor. I don't think it is as easy as it looks. You have to work extremely hard, especially if you are a woman. And I wonder if she has in her to bear with all of it. Also, there is a lot of failure involved, which many people don't see. The failure is personal, your acting skills, the way you look on screen is slashed out in open," she told news agency PTI.

Promoted
Listen to the latest songs, only on JioSaavn.com
Navya Naveli, like Shah Rukh Khan's son Aryan (who was also her batch-mate at Sevenoaks) or Saif Ali Khan's daughter Sara or Sridevi's daughter Jhanvi, is keenly followed on social media. She has a handful of dedicated fan clubs which share pictures and videos (like the one above) incessantly and often top trends list.