Trending: Kainaat Arora Mistaken For A Real Cop By The Internet

Kainaat Arora plays the role of a cop and posted pictures from the film's sets. 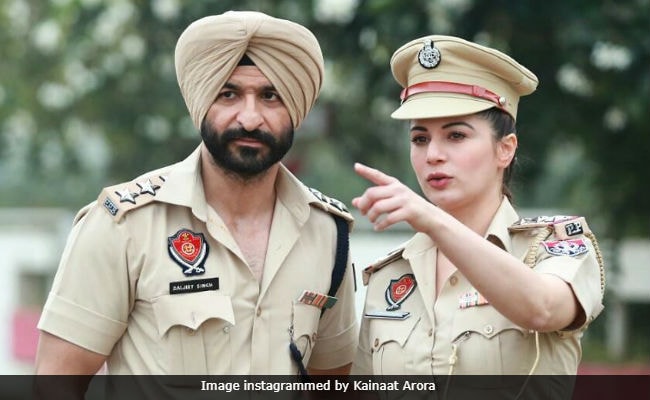 New Delhi: When Kainaat Arora shared pictures of from the sets of her new film, Jagga Juindae, she had no idea about the confusion it will cause. Kainaat plays the role of a cop named Harleen Maan in the film and she posted pictures of herself while she was still dressed in uniform. For some reason the Internet thought that Kainaat is a cop now and posted comments like: "Sabhi vilan ban jaenge." A few days later, Kainaat came across such comments and memes and clarified in another post that she was dressed as a cop just for the role. "Harleen Maan is my character name in the film Jagga Juindae. It's just a film. My phone memory is bombarded with forwards from all over the world, people sending messages and jokes - ready to get arrested, etc. I am no REAL POLICE."

Dear People ... harleen maan is my character name in the film #jaggajiundae .. it's just a #film .. my phone memory is bombarded with forwards Frm al over d world , people sending messages & jokes : ready to get arrested etc .. i Am no REAL POLICE .. 3 days and stil this photo is viral across the continent #WillTheRealKainaatPleaseStandUp #Viral&how #love&light

Check out some other pictures of Kainaat Arora from the sets of the film:

Promoted
Listen to the latest songs, only on JioSaavn.com
Kainaat Arora is a distant cousin of late actress Divya Bharti. She debuted in Grand Masti, co-starring Vivek Oberoi, Aftab Shivdasani and Riteish Deshmukh. Before Grand Masti, Kainaat featured in Aila Re Aila song in Khatta Meetha and a cameo in 2011 Tamil film Mankatha.

Kainaat made her Malayalam film debut in Lailaa O Lailaa and Telugu film debut in Mogali Puvvu (released in Hindi as Secret). She was last seen in 2015 Punjabi film Faraar.