Elli Avram, dressed in a bikini, is holidaying all by herself in Greece 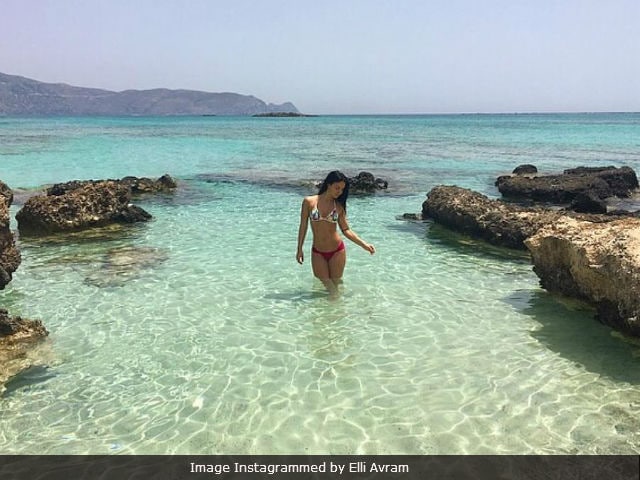 New Delhi: Elli Avram, a Swedish Greek actress, who was last seen in 2017's Naam Shabana, is on a solo trip to Greece (as she says in one of the hashtags accompanying her gorgeous pictures). The former Bigg Boss 7 contestant is posting updates from her trip to Crete in Greece on Instagram and her followers wants more pictures - one comment read: "Post more pics from this photoshoot." One Instagram user wrote Elli's picture reminds her of Dimple Kapadia from Saagar. She posted several pictures of herself in the midst of a beach pool (of sorts), one of which said, 'Into the wild I go, loosing my way and finding my Soul (sic).' Elli, dressed in a bikini, is definitely having a gala time - her hashtags are proof.

Elli Avram's Instagram post is all about soaking in positive vibes. She has also put hashtags like #me and #time which indicate that she is really enjoying her own space. Here are more pictures from Elli's solo trip to Greece:

Promoted
Listen to the latest songs, only on JioSaavn.com
Elli made her debut in Bollywood in Saurabh Verma's comedy Mickey Virus opposite Manish Paul. Before Bollywood, Elli featured in a Swedish film titled Forbjuden Frukt. After Mickey Virus, Elli romanced comedian Kapil Sharma in his debut film Kis Kisko Pyar Karoon. She had a cameo in Taapsee Pannu's Naam Shabana.

On television, Elli Avram became a household name after featuring in Bigg Boss 7. She later re-entered the house as a guest in season 8 and season 9. Elli has also appeared on Kapil Sharma's previous show Comedy Nights with Kapil. Elli Avram is quite popular in Bollywood social circuit as she's often spotted at parties hosted by Salman Khan (Bigg Boss host).