Viswasam First Look: Ajith will reportedly be seen playing a cop in the action film 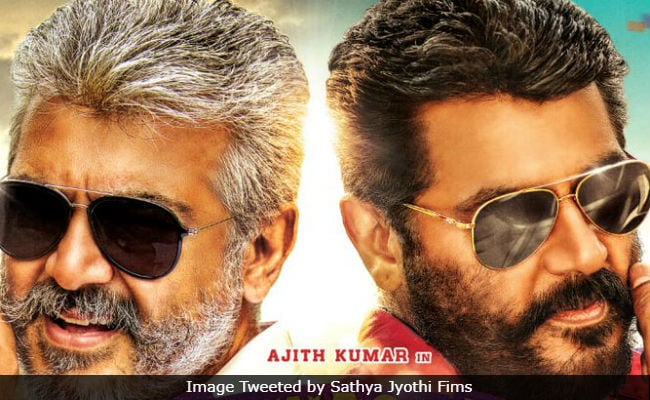 The makers of Viswasam unveiled the first look of the film on Thursday. Viswasam features Tamil star Ajith in the lead role and it has been directed by Sivakumar Jayakumar (popularly known as Siva). Apart from Ajith, the film also features Nayanthara, Vivekh, Robot Shankar, Yogi Babu and Anikha among others. In the poster, Ajith can be seen sporting two different looks. His usual salt-and-pepper look and can be seen twirling his mustache and in the other he can be seen sporting a red shirt and black hair. Viswasam producers Sathya Jyothi Films shared the poster on Twitter on Thursday and wrote: "We are excited to present to you Viswasam first look. #Pongal2019."

Check out the first look of Viswasam here:

We are excited to present to you #ViswasamFirstLook#Pongal2019@directorsiva@SureshChandraa@immancomposer@AntonyLRuben@vetrivisuals@Actor_Vivek@DoneChannel1pic.twitter.com/ez1cLQ7dnL

Viswasam was officially announced in 2017. However, the film's shooting was rescheduled due to the strike in the Tamil film industry. The film finally went on floors in May this year. The film is a Pongal release and will hit the screens on January 14 next year.

Viswasam will be Ajith's fourth collaborative project with director Siva. The duo have worked together in film such as Veeram, Vedhalam and Vivegam.

Ajith made his debut in the Tamil film industry with the 1990 film En Veedu En Kanavar. He is best-known for his performances in films such as Amarkalam, Dheena, Villain, Attahasam, Yennai Arindhaal and Vedalam among others. He was last seen in the 2017 film Vivegam, co-starring Bollywood actor Vivek Oberoi and Akshara Haasan.