Tom Hanks Says, 'For Us, Indian Movies Were Big B Running Around in His Glasses' 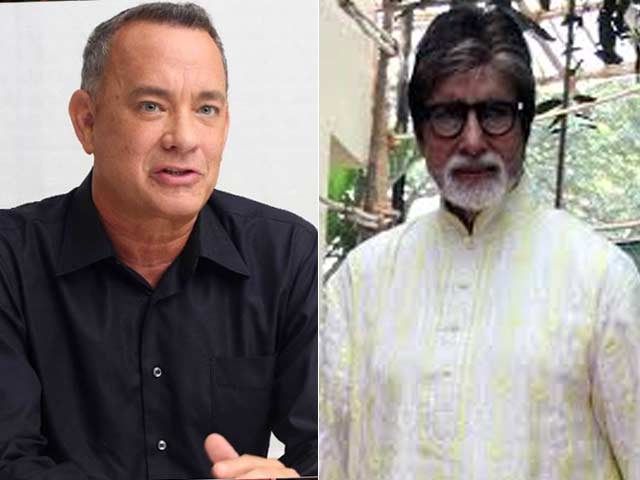 Tom Hanks' image on the left was posted by tomhanks_fanpagge. Amitabh Bachchan photographed in Mumbai

Singapore: Singapore, Oct 12 (IANS) Bollywood superstar Amitabh Bachchan "running around in his glasses and beating up bad guys" long stayed with Hollywood actor Tom Hanks and defined the world of Indian cinema for him. The Oscar-winning actor says the vast expanse of Indian cinema and different storytelling techniques still remain a mystery for the West, with only Bollywood making inroads abroad.

"For a lot of years, Indian movies for us were Big B running around in his glasses and beating up bad guys or midgets and stuff like that. We didn't quite understand what was going on. If everyone starts speaking the common language of cinema, it will start representing itself," Tom told IANS in an interview here.

The actor said "it is only a matter of time" till the varied Indian stories spin their way to the West.

"Like the cinema from Japan and China have impacted the entire cinematic narrative of the West like Crouching Tiger, Hidden Dragon by Ang Lee. Those guys are working in American films now. The fact is that we have not just been able to see films outside of Bollywood for whatever reason, or outside Satyajit Ray's films.

"But it is only a matter of time because people in the United States see everything...All you have to do is be available," he added.

Tom has worked with Indian star Irrfan Khan in his forthcoming Sony Pictures Entertainment's film Inferno. And he says he is open to attaching his star power to any Indian project, but would not do it "just to break into the marketplace".

But Tom will not be seen as a super spy climbing on the roof of Taj Mahal or doing stunts on helicopters - he'd rather do a film on "stereotypes of public life in India".

Be it acting, directing, producing or writing - Tom has explored different arenas of the creative field.

He made his debut with a low-budget movie He Knows You're Alone in 1979. Following that, Tom became a part of TV series like Bosom Buddies, Taxi and Family Ties, and TV movie Mazes and Monsters.

He got noticed with Disney's comedy Splash, which became the sleeper hit of 1984. It was Hanks' charm and upbeat attitude that got him instant stardom.

Today, film buffs, irrespective of age group, know Tom for movies like You've Got Mail, Sleepless in Seattle, The Terminal and Forrest Gump, Catch Me If You Can, Cast Away, Apollo 13, Saving Private Ryan and Captain Phillips.

After presenting Sully this year, Tom will be back on the silver screen with Ron Howard's Inferno, which will open in India on October 14, two weeks before its US release.

During a conversation with IANS here at an media event organised by Sony Pictures Entertainment, the Tom, 60, said he would like to work in Bollywood -- but not "just to break into the marketplace, but as soon as Americans start making movies about the stereotypes of public life in India".

"It doesn't have to be super spies climbing on the roof of the Taj Mahal or jumping on helicopters to defeat the bad guys. It will be something next (level) and I look forward to it," Tom said.

Promoted
Listen to the latest songs, only on JioSaavn.com
The two-time Oscar-winning star, who is amazed by the bold filming technique in India, said: "The industry in India is sort of like the dream come true. They make a lot of movies, people go to a lot of movies, and there is insatiable appetite for it... I was always amazed at just how dense they were and how they cover more than one genre."