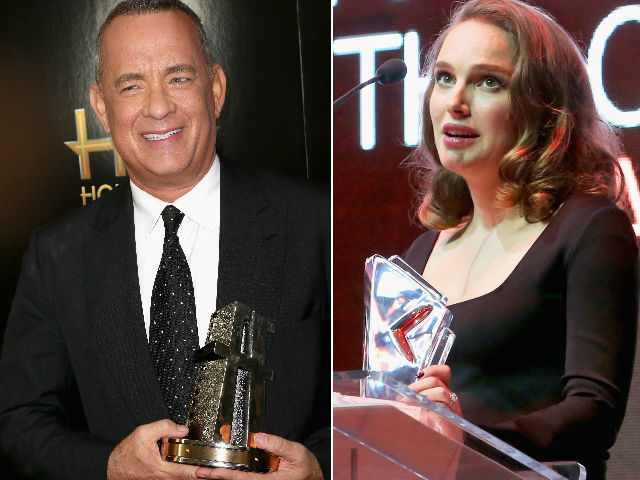 The "Hollywood Blockbuster Award" went to Disney's The Jungle Book while there was a comedy prize for two-time Oscar-winner Robert De Niro for his role in the upcoming The Comedian.

Natalie was recognized for her starring role in Jackie, a portrait of First Lady Jacqueline Bouvier Kennedy during the days immediately following her husband's assassination.

"His performance in Florence Foster Jenkins is miraculous and marvelous, and I always knew he was a wonderful actor," the film's British writer Nicholas Martin told AFP.

The ceremony, which has trademarked its description of itself as "The Official Launch of the Awards Season," is in its 20th year.

Mel Gibson, who is making a comeback after his career collapsed following an anti-Semitic tirade caught on tape, was accepted back into the fold with an award for directing.

"Our crew and cast would lie in front of the tracks for Mel. They adored him and loved him. He's an amazing filmmaker and an amazing individual," Hacksaw Ridge producer David Permut told AFP.

There was no shortage of glamour on the red carpet, with the prize-winners among a host of A-listers who were not nominated, including Aaron Eckhart, Andie MacDowell and Lenny Kravitz.

Jurassic World star Bryce Dallas Howard, whose upcoming crime thriller Gold bagged an ensemble award for its cast, told AFP she was excited to be going into the awards season.

"I haven't really done it that much. The year I was nominated for the Golden Globes it was cancelled," she said, referring to the 2008 ceremony, which was shelved due to a writers' strike.

"For me it's still this thing where I get to see all my friends, we're all dressed up and there's not much pressure."

Her Gold co-star Matthew McConaughey revealed that 2016 had been one of his "roughest" years as many family members and close friends had died -- "more so than the last 10 years combined."

Promoted
Listen to the latest songs, only on JioSaavn.com
"What that'll do is make you appreciate living a little more," he told reporters.