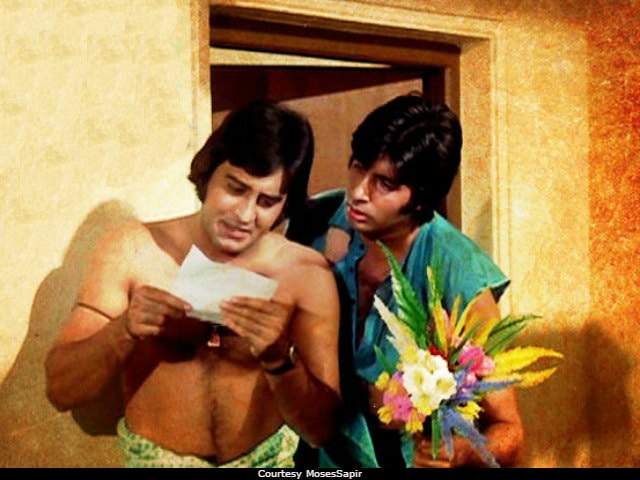 New Delhi: After news that actor-politician Vinod Khanna had died of cancer broke on Thursday morning, his frequent co-star Amitabh Bachchan reportedly left an interview midway to be with the family. He was later pictured at Mr Khanna's Malabar Hills home and attended the funeral. Mr Bachchan was spotted arriving with son Abhishek for the late actor's last rites. Earlier in the day, according to a report in Firstpost, Mr Bachchan rushed out of the interview to the hospital in Girgaon Mr Khanna had been taken to some weeks ago and where he died at the age of 70. Amitabh Bachchan and Vinod Khanna made several films together - from Reshma Aur Shera and Hera Pheri to Parvarish and Muqaddar Ka Sikander. They played brothers in the lost-and-found blockbuster Amar Akbar Anthony. Some of their contemporaries considered Vinod Khanna a rival to Amitabh Bachchan's 'Angry Young Man' tag - others believed that Mr Khanna was the original 'Angry Young Man.'

In 2006, Vinod Khanna opened up about his alleged rivalry with Amitabh Bachchan on NDTV's Bombay Talkies, and said: "I think we both worked very cordially with each other. But of course were both very different in the sense of the roles we portrayed on screen. We complemented each other. Both were very wary of the scripts and both would be very sure about each other's roles - that nobody's getting more and somebody's getting less. And accordingly we did those films together and could have gone on and on till I quit the industry." Mr Khanna also added: "I think it's the media that created the rivalry. We were friends, we're still friends but yes with the fan following everybody used to talk...Amitabh Bachchan/Vinod Khanna.."

A while ago, this old picture of Amitabh Bachchan and Vinod Khanna in cricket whites at a charity match went viral.

Mr Bachchan posted this tweet, believed to refer to Vinod Khanna, days earlier when rumours that Mr Khanna had died were wrongly circulated.

T 2486 - Strange is it not, that the passing of the near and dear and colleagues, coerces one to start questioning one's own longevity ! pic.twitter.com/Bm6KMFSKTt

Will miss you Amar. RIP. pic.twitter.com/WC0zt71R4J

Vinod Khanna, truly "Mere Apne", one of my most admired and loved personalities, the supremely handsome & talented superstar is no more..1>2

Right from films to politics, Vinod Khanna & I sailed together and he leaves behind an entire generation & more of fans, admirers...2>3

..friends, well wishers & loved ones grieving after him. May his noble soul find solace in the land of the almighty. Love you, miss you..3>4

Vinod Khanna, who was a sitting Member of Parliament, is survived by his wife Kavita and four children. His sons Rahul and Akshaye are also actors.