Bareilly Ki Barfi is a sweet love triangle starring Ayushmann Khurrana, Rajkummar Rao and Kriti Sanon while Lalkar (Velaiilla Pattadhari 2 in Tamil) is all about Dhanush vs Kajol 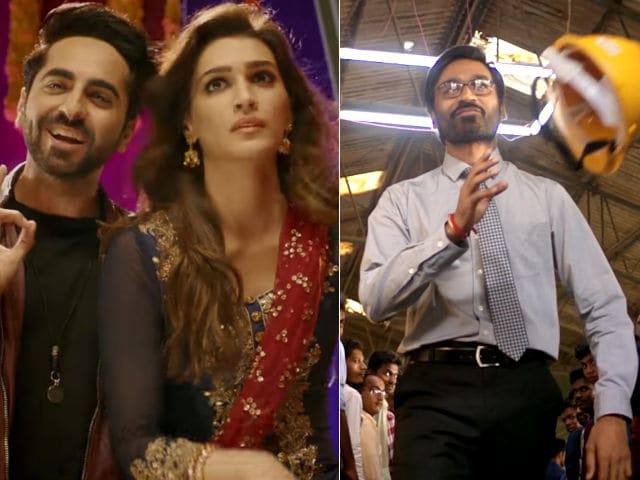 New Delhi: Another week has passed and new films are all set to hit the screens. Akshay Kumar's Toilet: Ek Prem Katha is still going strong at the box office as Ayushmann Khurrana, Rajkummar Rao and Kriti Sanon's Bareilly Ki Barfi hits the screens today. The film is directed by Ashwiny Iyer Tiwari (Nil Battey Sannata). The film is about Bitti (Kriti Sanon) who wants to live life on her own terms and refuses to follow her father's diktats. Chirag (Ayushmann Khurrana) work in a printing press and in heal over heel in love with Bitti, who on the other hand is in love with the author, who resembles Pritam. Chirag asks Pritam to meet Bitti as the author whom she loves and break her heart so that she can move on, in the hope that Bitti will fall for him later. But Pritam double crosses Chirag as falls for Bitti. What will be the outcome of this sweet love triangle? The answer is in cinemas near you.

Meanwhile, Raghuvaran is back. Dhanush's Velaiilla Pattadhari 2is releasing in Hindi (as Lalkar) today. Dhanush plays civil engineer Raghuvaran, who is an employee in the company of smart and conniving Vasundhara, played by Kajol. Obviously, Raghuvaran and Vasundhara's ideology do not match and all hell breaks loose. The film is directed by Dhanush's sister-in-law Soundarya Rajinikanth and it is produced by Dhanush. The film's Tamil version released last week and rocked the box office in a week.

The other big release of the day is Gurinder Chadha's Partition: 1947 (which released as Viceroy's House in English). The film is a retelling of the tale of India's partition through the perspective of the workers at India's last viceroy Lord Mountbatten's residence. The film stars Huma Qureshi and Manish Dayal along with British actors Hugh Bonneville, Gillian Anderson and Michael Gambon.

Which film will you watch this weekend?
Comments
bareilly ki barfilalkarPartition: 1947