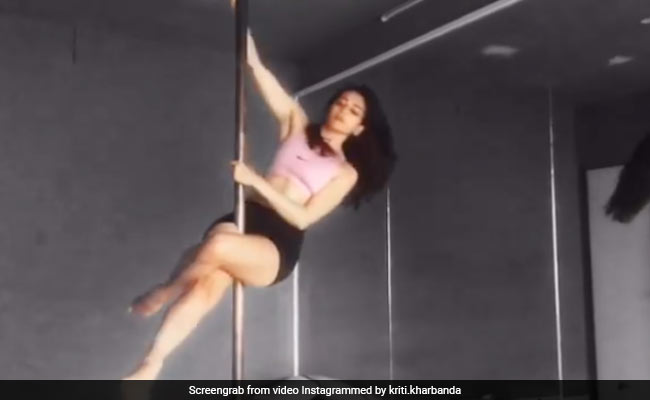 Kriti Kharbanda in a still from the video. ( courtesy: Kriti.kharbanda)

Bollywood actress Kriti Kharbanda is reliving her pre-lockdown days by sharing throwback videos on her Instagram profile. The Housefull 4 actress shared a video, in which she can be seen doing a pole dance, dressed in a pink tank top and a pair of black shorts. Kriti, who has posted videos from her pole dancing session on several occasions, described it as her "favourite form of workout" in one of her previous videos. In her caption, Kriti thanked her instructor Aarifa Bhinderwala and added a couple of black heart emojis.Take a look at Kriti Kharbanda's post here:

Kriti, who misses her pole dancing sessions, shared a video on her Instagram handle earlier this month and she wrote: "Throwback to my favourite form of workout! Definitely regret not installing a pole at home. Adding this to my to-do list post the lockdown! What's on your list? What do you really miss doing?"

ICYMI, this is the video we are referring to:

Throwback to my favourite form of workout! Definitely regret not installing a pole at home. Adding this to my to-do list post the lockdown! What's on your list !? What do u really miss doing!?

Last year, Kriti and her boyfriend Pulkit Samrat did a face-off of sorts. She shared a collage, which comprised a picture of herself on the pole, juxtaposed with Pulkit's rendition of the pole dance. She wrote: "Who does it better? Chandu... Tell tell," referring to Pulkit's character Chandu from Pagalpanti, in which they co-starred.

Kriti Kharbanda has featured in films such as Housefull 4 and Pagalpanti. The actress also starred in the Telugu film Maharshi, starring Mahesh Babu. She will next be seen in the Tamil film Vaan.