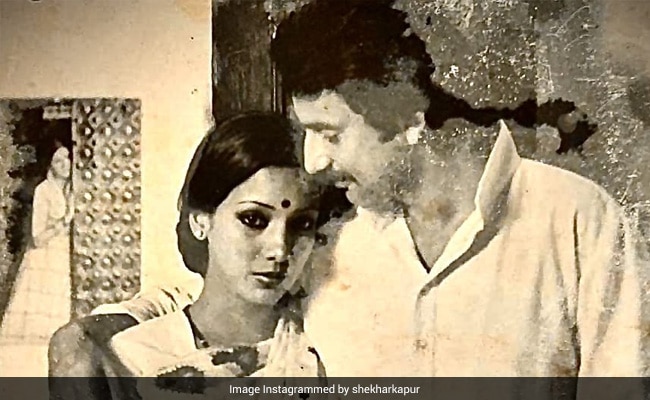 Filmmaker Shekhar Kapur, on Thursday, treated us to a really amazing throwback photo of himself. The vintage picture is actually from his 1979 film Jeena Yahan that was helmed by late director Basu Chatterjee, a legendary filmmaker who died in June last year. The photo is a still from the film and it also features veteran actress Shabana Azmi. In the blast from the past, a much younger version of Shabana Azmi looks gorgeous in a saree while Shekhar Kapur can be seen sporting a kurta. Sharing the old photo, Shekhar Kapur wrote: "Guess what I got, sent from someone's box of old pics? It's a still from Basu Chatterjee's Jeena Yahan. It was a really interesting film about the conflicts of urban vs small town/rural living from a cultural perspective."

Shabana Azmi made her film debut with the 1974 movie Ankur, for which she won her first National Award for the Best Actress. She has won four other National Awards in her acting career. She is known for her performances in films like Arth, Bhavna, Neerja, Khandar, Masoom, Paar, Tehzeeb, Godmother, Fire and Sati among many others.

Shekhar Kapur is an actor and filmmaker. He has featured as an actor in films such as Jaan Hazir Hai, Khanjar, Nazar and Vishwaroop. His directorial debut was 1983's Masoom, which co-starred Shabana Azmi and Naseeruddin Shah.