The couple is expecting their first child together 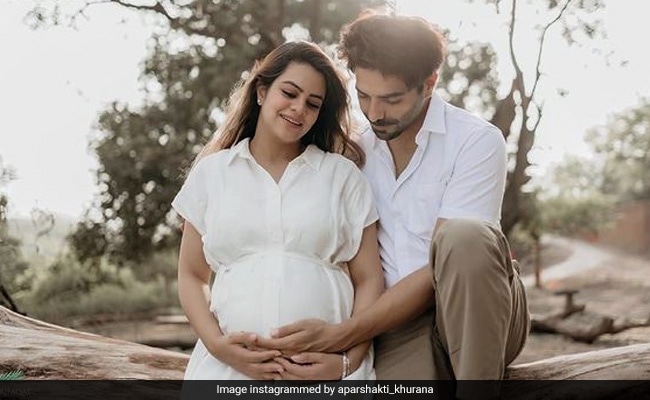 Actor Aparshakti Khurana gave us an adorable glimpse into the couple's maternity photoshoot with a post on Instagram. The actor posted a cute picture where he is seen posing with his wife Aakriti Ahuja. Aakriti, who has a beautiful pregnancy glow on her face, is all smiles in the image. Actor Ayushman Khurana's brother, Aparshakti looked like a doting father-to-be as he lovingly cradles Aakriti's growing baby bump. The couple is seen twinning in white and the joy on their face is unmissable. The Stree actor posted the beautiful picture along with three red hearts in the caption. It seemed fitting given that the lovely family was growing from two to three, with the bundle of joy joining them in the next few months.

The picture received a lot of love as friends and fans, including sister-in-law, writer Tahira Kashyap and actress Mukti Mohan, dropped heart emojis in the comment section.

The couple had announced the good news on social media on June 4, 2021, with a cute picture and hilarious caption. Aparshakti posted a sweet picture of himself kissing his wife's baby bump along with the funny caption, “Lockdown mein kaam to expand ho nahi paya toh hume laga family hi expand kar lete hai. #PreggerAlert (We could not expand our work due to the lockdown, so instead we decided to expand our family)."

The actor who is known for his impeccable comic timing definitely managed to get us laughing out loud with his quirky pregnancy announcement.

On the occasion of Father's Day, Aakriti posted an equally adorable picture of the duo wishing the daddy-to-be. In the picture, the couple is seen facing each other and making cute faces, as Aparshakti holds Aakriti. Couple goals, did you say? Aakriti posted the picture along with a sweet caption, “Happy Father's Day to my Baby Daddy. #MyBabyDaddyStrongest.”

Aparshakti Khurana married Aakriti Ahuja in 2014. On the work front, Aparshakti was last seen in Street Dancer 3D starring Varun Dhawan and Shraddha Kapoor. The anchor and actor will next be seen in Helmet directed by Satram Ramani.