This Pic Of Suhana Khan, Shweta Bachchan Nanda, Agastya Nanda And Farah Khan Is Way Too Cute To Be Missed

Too much love in one frame, we must say 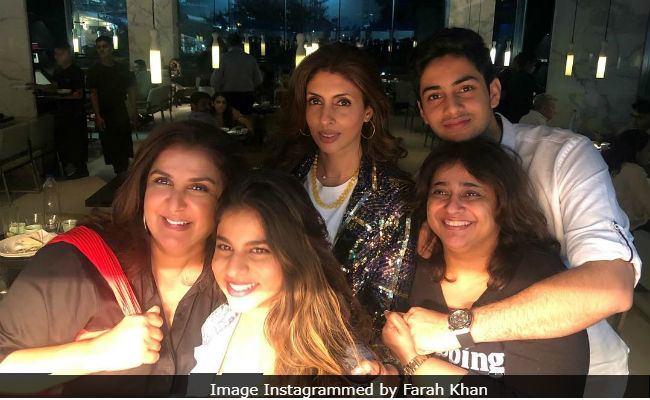 Farah Khan treated her Instafam to a million-dollar picture of herself along with Shah Rukh Khan and Gauri Khan's daughter Suhana Khan, Shweta Bachchan Nanda and her son Agastya Nanda and Kaajal Anand. In the sun-kissed selfie, Farah and Suhana can be seen smiling at the camera, while Agastya can be seen posing with his arms rested on Kaajal Anand's shoulders. Farah captioned the post in the most beautiful way possible and wrote: "Good friends make the good times better and the hard times easier. In her caption, Farah addressed Suhana and Agstya as "beautiful babies." She added, "Thank you Shweta Bachchan Nanda for a lovely evening and the beautiful babies for putting up with us." Needless to say, Farah's post received lots of love from her Instafam.

Good friends make the good times better and the hard times easier.. thank u @putlu @shwetabachchan for a lovely evening.. n the beautiful babies for putting up with us

Too much love in one frame, we must say.

Farah Khan, a filmmaker and choreographer shares a good rapport with Shweta Bachchan Nanda (who is Amitabh Bachchan and Jaya Bachchan's daughter). Shweta and Farah are frequently spotted together and Shweta Bachchan was also a part of Farah's 54th birthday celebrations in January this year. Here is the picture:

My happy birthday was truly happy..My games gang!! #peopleilove #foodcoma ( why is shweta behaving so reluctant

Farah Khan and Suhana's father Shah Rukh Khan are a part of a close-knit friend circle, which also includes filmmaker Karan Johar. Farah has directed two of SRK's films which include Om Shanti Om and Happy New Year. She has also choreographed for many of Shah Rukh Khan's films such as Kuch Kuch Hota Hai, Kabhi Khushi Kabhie Gham and Kabhi Alvida Naa Kehna among others.