This Little Girl Grew Up To Be A Singing Sensation. Any Guesses?

Here's a hint: She has sung the track Manali Trance 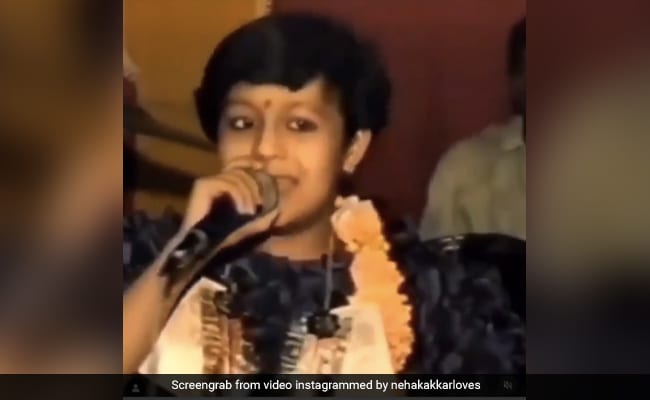 A still from the video posted by a fan club. (courtesy nehakakkarlovers)

Way before she ruled the music charts, Neha Kakkar used to sing at Jagrans. Recently, a childhood video of the singer from one of her jagran performances has been doing the rounds on social media and is trending big time. Little Neha Kakkar can be seen singing the track Jungle Jungle Pata Chala Hai from the The Jungle Book. In the video, Neha can be seen dressed in a ruffled outfit and can be seen sporting short hair. She signs off her performance by saying, "Bol saache darbar ki jai." The video has been shared by several fan clubs dedicated to the singer on Instagram.

Neha Kakkkar's fans were delighted to see the video and dropped comments like: "So cute" and "how nice." The singer's fans filled up the comments section with heart emojis. Take a look at the viral video here:

Last week, the singer started trending big time after she posted a picture of herself with  Rohanpreet Singh (Mujhse Shaadi Karoge and India's Rising Star). She sort of made her relationship official with him and she wrote: "You're mine." In the comments section, Rohanpreet wrote: "Neha babu, I love you so much...Yes, I am only yours, meri zindagi."

Neha Kakkar is best-known for singing tracks such as Second Hand Jawaani from Cocktail, Dilbar redux, Manali Trance, Kala Chashma, Aankh Mare redux from Simmba among many others. Neha Kakkar has also appeared as a judge on the singing reality shows Indian Idol and Sa Re Ga Ma Pa L'il Champs.