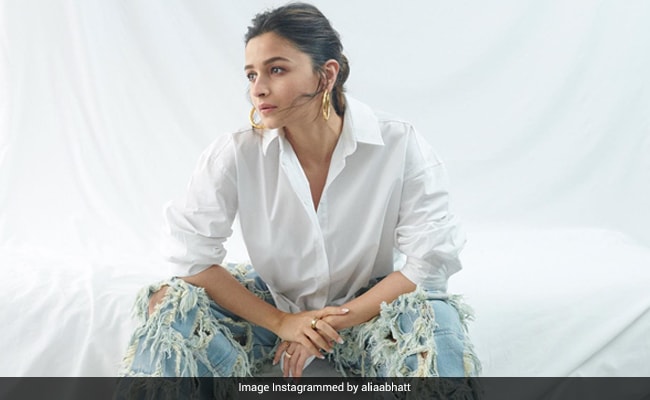 Alia Bhatt, busy with Darlings promotions, shared a couple of pictures of her OOTD on Instagram on Wednesday. She captioned the post: "Just another day... lounging around and promoting darlings - hope you're having a nice day... bye." She added the hashtag #DarlingsOnNetflix to her post. In the comments section of Alia's post, her 2 States co-star Arjun Kapoor wrote: "This jawline during pregnancy kamaal hai Alia Bhatt... too gewd." Ranbir Kapoor and Alia Bhatt got married in April at their house Vastu in the presence of family and a few close friends. They will be seen sharing screen space for the first time in Ayan Mukerji's Brahmastra. Announcing her pregnancy last month, Alia Bhatt wrote in an Instagram post: "Our baby ...Coming soon."

Arjun Kapoor and Alia Bhatt never fail to set friendship goals. When Alia posted these sun-kissed pictures and wrote "Just give me my sunshine and I'll be on my way," Arjun Kapoor commented: "Sunshine is in Mumbai shooting with Luv Ranjan but." LOL.

Earlier this year, after attending Luv Ranjan's wedding in Agra, Arjun Kapoor posted this picture and wrote: "When Ranbir Kapoor the artist emerged inspired by the Taj + Me..." He tagged Alia Bhatt in his post.

On the professional front, Alia Bhatt recently wrapped the shoot of Heart Of Stone, co-starring Gal Gadot and Jamie Dornan, which marks her Hollywood debut. She awaits the release of Darlings, which marks her debut as a producer. She will also be seen in Karan Johar's Rocky Aur Rani Ki Prem Kahani and Farhan Akhtar's Jee Le Zaraa.