This Is When Varun Dhawan's October Will Release

Varun Dhawan shared an update about his upcoming film October 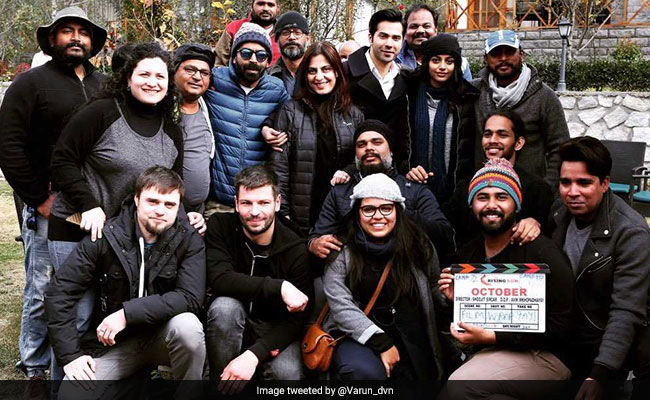 New Delhi: Varun Dhawan's new movie October is arriving in April and will finish its schedule in November, the actor shared on Twitter. The news arrived with pictures of October's team with Varun Dhawan, who revealed that the film wraps in November and will release in April. "#October wraps in November. Will release in April and will stay with you forever," Varun tweeted about the schedule of the movie on Wednesday. Earlier, Varun had revealed that the film will hit the theatres on April 13, next year: "Delhi schedule of #October wraps #octoberdiaries #octoberfamily #delhi #13thapril2018 . Thank you to the wonderful family/team who worked super hard." Directed by Shoojit Sircar, the movie is Varun's first venture with the filmmaker and also model Banita Sandhu, who makes her Bollywood debut with the film.

Take a look at the pictures shared by Varun Dhawan:

#October wraps in November. Will release in April and will stay with you forever. pic.twitter.com/sedfWsqZGB

Recently, Varun had also shared the first look poster of October. Seen yet?

Promoted
Listen to the latest songs, only on JioSaavn.com
Talking about his first venture with the Madras Café director, Varun had told NDTV: "I have been an ardent fan of Shoojit da's work and have always wanted to work with him." When asked about how different his character is from the other roles he's featured in so far, he said: "October is a beautiful story in which I play a character with many layers. It's a difficult character to play. I just want to surrender to my part and show people a new side of me. Shoojit da, Ronnie (Lahiri) and Juhi have always made good cinema I feel I feel grateful to join their team."

Varun Dhawan, the son of director David Dhawan, recently gave Bollywood one of the year's big hits with Judwaa 2, co-starring Jacqueline Fernandez and Taapsee Pannu. He also starred with Alia Bhatt in Badrinath Ki Dulhania, released earlier this year. He also has Sui Dhaaga in the pipeline.