This Is What Kajol Looks Like When She's 'Living In Denial'

Kajol often shares these simple mid-week posts. Like last week, she shared this post about "laughing at her own jokes" 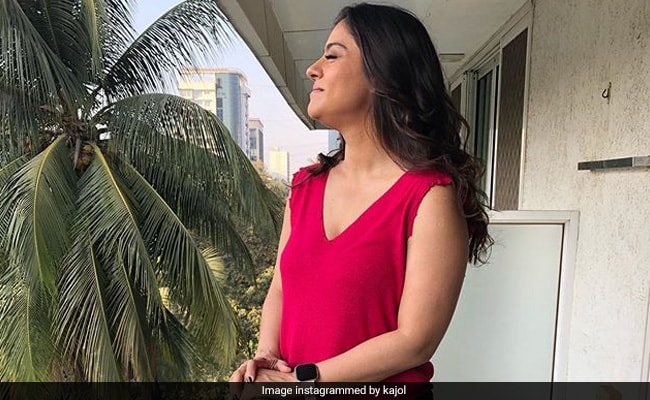 We are getting major positive vibes from Kajol today. The 45-year-old actress, who often trends for her interesting Instagram posts, shared one on Thursday with the hashtags "eyes wide shut" and "it's all good." Sharing a photo of herself chilling in a balcony with her eyes closed, Kajol bid adieu to all things negative. "Nope, I refuse to see the bad today... loving living in denial," she captioned her post. Kajol's recent film Tanhaji: The Unsung Warrior, which made over Rs 257 crore in almost a month. Kajol co-starred with husband Ajay Devgn in the movie. Kajol is now busy with short film Devi, which has an ensemble cast.

Kajol often shares these simple and lightly humoured mid-week posts. Like last week, she was "laughing at her own jokes" and was like...

Kajol recently shared a happy memory with her daughter Nysa on Instagram. Kajol was glad to have Nysa, who studies in Singapore, back home in Mumbai. "On the Mumbai roads after so long with my baby," she captioned her post.

However, Kajol trended a great deal recently for sharing glimpses of her love story with Ajay Devgn in a Humans Of Bombay post: "My friends warned me about him. He had quite a reputation. But he was different with me, that's all I knew."

Repost @officialhumansofbombay We met 25 years ago, on the sets of Hulchul-I was ready for the shot & asked, 'Where's my hero?' Someone pointed him out-he was broodily sitting in a corner. So 10 minutes before I met him, I bitched about him! We began talking on set & became friends. I was dating someone at the time & so was he-I've even complained about my then boyfriend to him! Soon, we both broke up with our significant others. Neither of us proposed-it was understood that we were to be together. It went from hand-holding to a lot more before we knew it! We used to go for dinners & so many drives-he lived in Juhu & I, in South Bombay, so half our relationship was in the car! My friends warned me about him-he had quite a reputation. But he was different with me-that's all I knew. We'd been dating for 4 years, when we decided to get married. His parents were on board, but my dad didn't talk to me for 4 days. He wanted me to focus on my career, but I was firm & he eventually came around. Again, there was no proposal-we just knew we wanted to spend our lives together. We got married at home & gave the media the wrong venue-we wanted it to be our day. We had a Punjabi ceremony & a Marathi one! I remember, during the pheras Ajay was desperately trying to get the pandit to hurry up & even tried to bribe him! I wanted a long honeymoon-so we travelled to Sydney, Hawaii, Los Angeles... But 5 weeks into it, he fell sick & said, 'Baby, book me on the next flight home!' We were supposed to do Egypt, but we cut it short. Over time, we began planning to have kids. I was pregnant during K3G, but had a miscarriage. I was in the hospital that day-the film had done so well, but it wasn't a happy time. I had another miscarriage after that-it was tough. But eventually it worked out-we had Nysa & Yug & our family's complete. We've been through so much-we've formed our own company, Ajay's on his 100th film & every day we're building something new. Life with him is content-we're not too romantic or anything-we care for each other. If I'm thinking idiotic things, it'll come out of my mouth without a filter & vice versa. Like right now I'm thinking that he owes me a trip to Egypt!