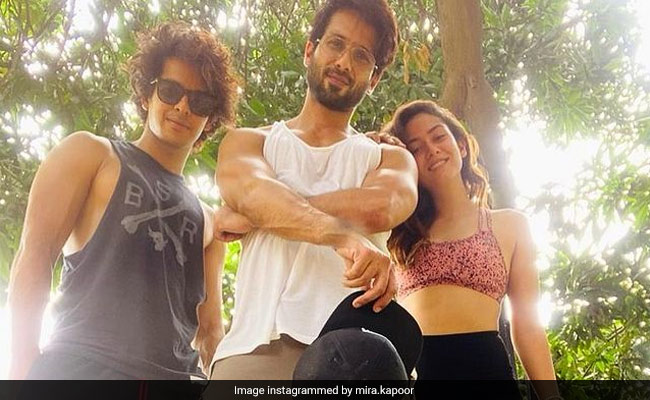 Shahid Kapoor's wife Mira Rajput, on Tuesday, treated his fans to a new picture of the actor. The picture that Mira shared on Instagram features her with Shahid Kapoor and his brother, actor Ishaan Khatter. It looks like the trio clicked the picture after a workout session as all of them can be seen dressed in training outfits. While Shahid Kapoor and Ishaan Khatter can be seen wearing ganjis and shorts, Mira Rajput can be seen dressed in a sports bra and yoga pants. In the picture, the trio can be seen posing against the backdrop of a lush green background. Sharing the picture on Instagram, Mira Rajput wrote: "Dream Team." Mira Rajput's Instafam commented on her post. "Cool," an Instagram user wrote in the comments section of the post, while most others dropped heart and fire emojis.

Mira Rajput is quite active on social media. She often shares glimpses from her daily life on the platform. Yesterday, Mira marked International Yoga Day with a video of herself performing some Yoga asanas. "You don't need to be a Yogi to do Yoga! Bring your mat and some motivation and let's get flowing," she wrote in the caption of the video.

On Father's Day, Mira had shared a picture of herself and her father. In the picture that she shared, Mira can be seen hugging her father. "Love you the most Dad with you it's Father's Day everyday," she wrote in the caption.

Besides sharing glimpses from her every day life, Mira also shares beauty and lifestyle videos on Instagram.

Shahid Kapoor and Mira Rajput got married in an intimate wedding ceremony in July 2015. The couple later welcomed two children - daughter Misha and son Zain. They often trend on social media for their posts.