BAFTA Nominee Adarsh Gourav Gets An Utterly, Butterly Shout Out From Amul

The text on Amul's topical read: "Gourav for Adarsh?" 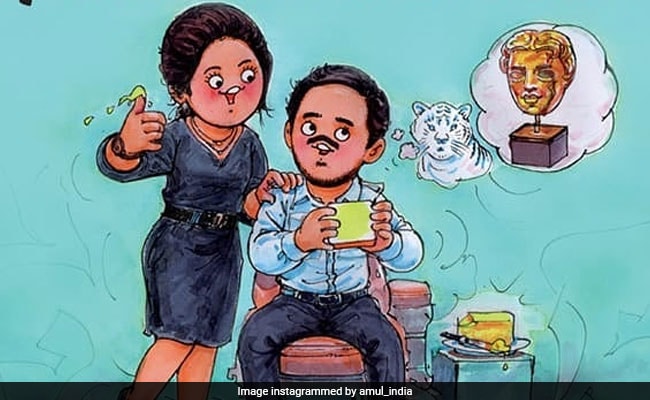 As congratulatory greetings for BAFTA nominee Adarsh Gourav keep pouring in, Amul stole our hearts again with a super cute post for the The White Tiger star, who has landed the leading actor BAFTA nomination for his performance in the Netflix film. They posted an adorable cartoon that features a picture of his character Balram Halwai in the film. We also spotted a white tiger and a BAFTA trophy in the backdrop. The text on Amul's topical read: "Gourav for Adarsh?" The subtext read, "White Tiger, yellow try kar." Sharing the post on its official Instagram handle, the dairy brand wrote: "Indian actor one of five nominees for prestigious BAFTA awards."

Adarsh Gourav was announced as one of the nominees in the category alongside seasoned actors like Riz Ahmed (Sound Of Metal), late Chadwick Boseman (Ma Rainey's Black Bottom), Mads Mikkelsen (Another Round), Anthony Hopkins (The Father) and Tahar Rahim (The Mauritanian).

In an interview with news agency PTI, the actor said, "This is unbelievable. It is surreal... I was at the gym. I just found out about the nomination." He added, "I saw my phone and there were a lot of messages on The White Tiger WhatsApp group and Pooja Gupte, the DOP called me. This is so unexpected and overwhelming."

The White Tiger is based on Aravind Adiga's Booker Prize-winning novel of the same name. It showcases the rags to riches story of Balram Halwai. The film also starring Priyanka Chopra and Rajkummar Rao, opened to largely positive reviews.