The Truth About Baahubali's Prabhas And Chiranjeevi's Niece Niharika's Wedding

Prabhas' family is looking for a suitable match for the actor 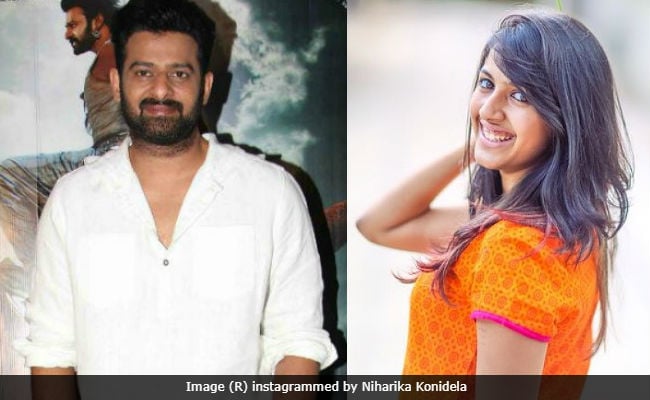 New Delhi: Baahubali actor Prabhas is not getting married to Chiranjeevi's niece Niharika Konidela, the Khaidi No 150 actor said in a statement, reports Zoom. After reports of Prabhas and Niharika's impending wedding circulated on the Internet, Chiranjeevi released a statement, in which he said that Niharika's family wants her to concentrate on her career for now and that her wedding is not on the family's priority list. Niharika Konidela is the daughter of Nagendra Babu, Chiranjeevi's brother. Niharika made her Telugu film debut in 2016's Oka Manasu and her upcoming films are Happy Wedding (Telugu) and Oru Nalla Naal Paathu Solren (Tamil debut). She has also starred in several web-series. Niharika's brother Varun Tej is also an actor.

Promoted
Listen to the latest songs, only on JioSaavn.com
Everyone knows that Prabhas' family is also looking for a suitable match for him. Earlier this year, Prabhas' uncle had said that Prabhas may get married by the end of 2018. Though, he added that they are still looking for Prabhas' bride-to-be. It was earlier reported that Prabhas is dating (and may get married to) his Baahubali co-star Anushka Shetty but both actors denied the reports. Prabhas said that he's known Anushka for more than nine years as they are family friends and that they had decided long ago that they'll 'never let dating rumours about them do the rounds.'

Prabhas, who has once received 6,000 marriage proposals (he rejected all due to work commitments), is currently filming Saaho, which is being made in Telugu, Tamil and Hindi simultaneously. The film also stars Shraddha Kapoor, Neil Nitin Mukesh and Mandira Bedi.