Anushka Sharma and Virat Kohli's photos are all about love 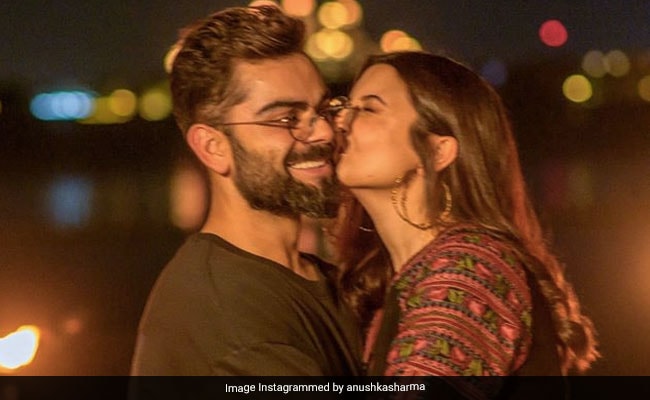 Virat Kohli celebrated his 32nd birthday on Thursday, which wrapped with an adorable birthday wish from wife Anushka Sharma. On Instagram, Anushka shared a no-caption-needed kind of a post - two loved-up moments from Virat Kohli's birthday celebrations. In one of the photos, Anushka can be seen goofily kissing Virat, and his smile says it all. Virat is currently in Dubai for the Indian Premier League. Virat also celebrated a part of his birthday with his team Royal Challengers Bangalore, who tweeted photos of a cake-smeared Virat to wish Captain Kohli. But it's Anushka's birthday post for Virat which stole the cake. Priyanka Chopra, Sonali Bendre, Mouni Roy and Tahira Kashyap were among the first celebs to drop the heart-eyed emojis to Anushka's post.

Anushka Sharma and Virat Kohli's photos are all about love.

Earlier in the day, RCB wrote this "smashing" birthday message for Virat Kohli: "Captain Kohli's birthday celebration was as smashing as his batting!" In social media videos, Anushka can be seen treating Virat to a piece of birthday cake while his teammates sing the birthday song for him.

How it started ➡️ how it ended 😉

Captain Kohli's birthday celebration was as smashing as his batting! 🎂@imVkohli#PlayBold#WeAreChallengers#HappyBirthdayViratKohlipic.twitter.com/sWsuNJHxse

Meanwhile, Anushka and Virat are expecting. They dropped the pregnancy news in August, with the cutest statement ever: "And then, we were three! Arriving Jan 2021." In terms of work, last seen in 2018 movie Zero, Anushka Sharma produced two web shows this year - Pataal Lok from Prime Videos and Bulbbul for Netflix.

Virat Kohli Kohli has scored 460 runs this season in the IPL, helping RCB reach the knockout stages for the first time since 2016.