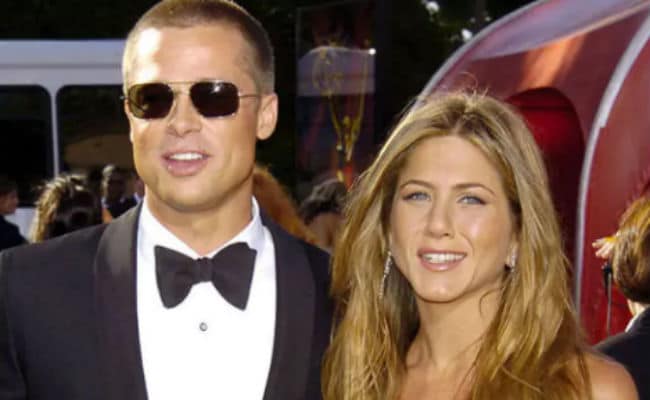 New Delhi: So hey, Jennifer Aniston just revealed she's now single after separating from husband of two years Justin Theroux. For once, social media is mercifully void of the 'love is dead' laments that generally follow in the wake of a celebrity break-up. Because Brad Pitt, the man Jennifer was married to before Justin, is also currently unattached - and there's really nothing we love more than two lonely hearts getting back together. So Twitter, which is nothing if not the king of wishful thinking, is already shipping Jennifer and Brad, just hours after it was announced that she and Justin Theroux decided to separate at the end of last year.

#JenniferAniston
When u realize both Jennifer Aniston & Brad Pitt are now single pic.twitter.com/Y9cxfIWQyH

Brad Pitt about to drive by Jennifer's house like...#JenniferAnistonpic.twitter.com/TRNL9LQaq7

Brad Pitt and Jennifer Aniston are getting back together. I called it first. #JenniferAnistonpic.twitter.com/2BPeomEwbi

Brad Pitt turning up at Jennifer Aniston's place like pic.twitter.com/u4uGJ57NoO

Could Brad and Jen 2.0 really happen? Don't hold your breath. A source told HollywoodLife, "Brad knows it's difficult for anyone when they go through a separation, but he's not happy that his name will be linked with hers again in all the coverage of Jen's separation." Should it happen? These tweets raise a red flag.

Y'all really think Jennifer Aniston about to go sniffing around Brad Pitt when he got 10 kids and an alcohol addiction? Meanwhile she has a yoga body and a Smart Water deal w/ 0 kids in sight. She good.

Why would any Jennifer Aniston fan want her to go back to the man who cheated on her? Besides, she's blissfully childfree. I doubt she wants the kids he had with the other woman eating her fruit loops and coloring on the walls.

Guys obviously Brad Pitt and Jennifer Aniston aren't gonna get together. Him and Ross was in an "I hate Rachel Greene club"

The sweetest comment (I've seen so far) on Jennifer Aniston's divorce is "I knew it! She still loves Ross!"#JenniferAniston

While we're on the subject of Ross:

Jennifer Aniston is one divorce away from being Ross

So, no. Twitter will just have to live with the heartbreak.

Jennifer Aniston, star of F.R.I.E.N.D.S and many, many rom-coms, married actor and writer Justin Theroux in August 2015, after dating for over four years.

Promoted
Listen to the latest songs, only on JioSaavn.com
A statement released by the actress' publicist and carried by AFP and other agencies reads: "In an effort to reduce any further speculation, we have decided to announce our separation. This decision was mutual and lovingly made at the end of last year. We are two best friends who have decided to part ways as a couple, but look forward to continuing our cherished friendship. Whatever else is printed about us that is not directly from us, is someone else's fictional narrative. Above all, we are determined to maintain the deep respect and love that we have for one another."

Brad Pitt married his Mr & Mrs Smith co-star Angelina Jolie after divorcing Jennifer in 2005. Angelina revealed years later that they had fallen in love while Brad was still married to his ex-wife. Brad and Angelina, who have six children, separated in 2016.