It took years for the power couple to get together. But they can laugh about that now. 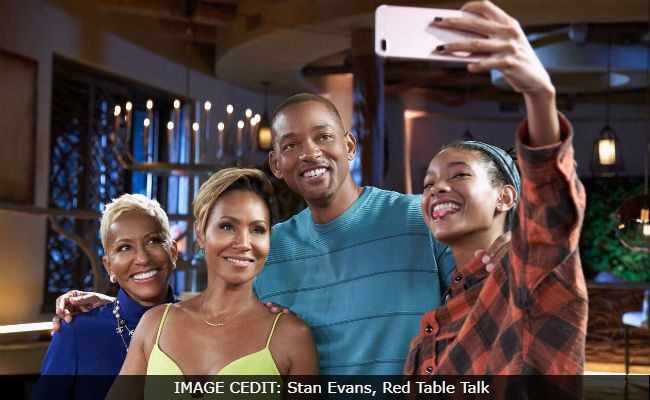 Some of the best relationships do not proceed directly from meet-cute to togetherness. Rather, they meander, as Will Smith and Jada Pinkett Smith's relationship has.

This week, Will was the guest on Red Table Talk, Jada's Facebook Watch talk show, and the two dished all about their relationship, with their daughter, Willow, and Jada's mother, Adrienne Banfield-Jones, chiming in. Here are some of the biggest twists and turns in their relationship.

- Instead of a meet-cute, they had several "near-misses."

When Will saw Jada on A Different World, he knew had to meet her. "I knew there was something in our energy that would be magic," Will recalls more than 20 years later. But the night Will and his Fresh Prince of Bel-Air co-star Alfonso Ribeiro went to a taping of A Different World, expressly to meet Jada ... Will instead ended up meeting Sheree Zampino, whom he proceeded to date and marry. Will and Jada had had several "near-misses," but when they did finally meet and talk during a gathering at an L.A. jazz club, Smith realized that that initial spark he'd had about Jada was spot-on.

But he was married and didn't believe in divorce, he said. So he didn't act on that attraction, even though it had a powerful effect on him, driving Will to break down in tears in a restaurant bathroom while at dinner with Zampino. "I had a realization I wasn't with the person I was supposed to be with," Will said on the Red Table Talk. In telling this story, Jada turned to the camera and said point-blank: "We did not have an affair while he was married. Let's be clear about that." Only after Zampino decided to divorce Will did he and Jada start dating.

- Jada dropped everything to move across the country to be with Will.

Will recalls that, after his breakup with Zampino, he called Jada, who had just bought a farm in Baltimore, and asked her: "Are you seeing anybody?" When she said no, Will said: "Cool. You're seeing me now." She reflects now on how she was "dumb" to pick up and move to Southern California, having not even spent one night in the house she bought for herself, but also believes that it was the right move.

- "It was a horrible wedding."

About two years into dating, Jada got pregnant. She didn't want to get married or have a wedding, she said, but her mom, Banfield-Jones, wanted them to have a wedding. "I'm sorry I didn't respect your wishes," Banfield-Jones said on Red Table Talk. She just wanted that experience of being at her daughter's wedding.

However, the wedding itself was "horrible," Jada says. She was three months pregnant and wasn't feeling well. Viewers can see that discomfort on Jada's face in the wedding photos shown in this part of the episode. "I went crying down the freaking aisle, getting married," she recalled.

It wasn't the commitment of marriage that Jada was against, she said, but rather all the conventional ideas of what a "wife" should be that didn't feel right. Will, on the other hand, always imagined himself getting married and says that being married makes him a better man.

- Early in their marriage, one fight made them commit to being better communicators.

Will remembers a party they'd had during which Jada cursed at him while he had his young son Trey on his lap. Will proceeded to hit his wife with a newspaper and take her aside in the other room to talk. "Jada, this is the deal," he said to her. "I grew up in a household where I watched my father punch my mother in the face - and I will not create a house, a space, an interaction with a person where there's profanity and violence. If you have to talk to me like that, we can't be together."

So they decided then and there that they wouldn't communicate to each other while angry - they would get their anger out privately and then come back, calm and collected, and settle their arguments without yelling or cursing. They've taken communication classes, Will said, and that practice has seemed to pay off. "It was 20 years before we used profanity in any conversation that we had," Will said.

This part of the episode was extremely instructive and can translate to viewers' relationships, as learning how to argue effectively with your significant other is a skill that takes practice. And Will and Jada are candid about just how much work it takes to fight without getting stuck in the anger. Will said he now has stock phrases that he uses when he's too angry to talk. He'll say something like:

"I'm impaired. I can't be loving right now. I can't be kind right now. So you have to let me go. When I come back, I will come back in a way that is the way you deserve me to be."

- "Externally, our family was winning," Will says. But at home, Jada was having a hard time.

Will remembers a time when everyone in the family seemed to be doing well in the outside world: Jada was starring in the medical drama Hawthorne; Willow's single Whip My Hair was doing well; Will and Jada co-hosted the Nobel Peace Prize Concert. But at home, Jada was waking up and crying every day.

In the video, she talks about the difficulty of staying home to raise kids while Will's life was barely disrupted. They had different ideas of what made a good relationship, and when she turned 40, Jada said: "I can't do this like this anymore."

What changes did that realization prompt? We'll find out on the next episode of Red Table Talk.

(Except for the headline, this story has not been edited by NDTV staff and is published from a syndicated feed.)
Comments
will smithwill smith familyjada smith