"The Dabggubutterly wedding," read the tagline 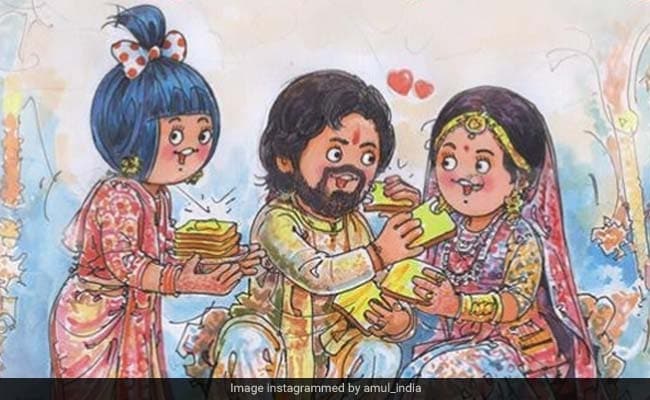 Telugu star Rana Daggubati and entrepreneur Miheeka Bajaj got married in Hyderabad on Saturday and the pictures from their wedding are a sheer delight (more on that later). This is the story of the Amul topical inspired by the couple's dreamy wedding. On Tuesday, a post was shared on the Instagram page of the dairy brand and it has the Internet's heart. We bet you've seen many pictures from the couple's wedding festivities but this post surely demands everyone's attention. The post features adorable caricatures of Rana Daggubati and Miheeka Bajaj, dressed in their respective wedding outfits. From their hairstyles, to their outfits, everything is on point. The cherry on the cake was the tagline of the post that read, "The Dabggubutterly wedding."

The caption on the post read: "The Rana- Miheeka shaadi is an Internet sensation!" An Instagram user commented "So cute" on the post. "Nailed it," added another. Heart emojis kept popping up in the comments section.

#Amul Topical: The Rana- Miheeka 'shaadi' is an Internet sensation!

Rana Daggubati and Miheeka got married in an intimate ceremony in Hyderabad on Saturday, in the presence of a few family members. Other than members of the Daggubati family, Rana's best friend Ram Charan and his wife Upasana, and actor Allu Arjun, were also among the 30 guests who received invites. Check out the trending pictures from Rana and Miheeka's wedding:

Rana Daggubati, who starred as the antagonist Bhallaladeva in the Baahubali series, made his acting debut with the 2010 Telugu film Leader. The actor stepped into the Hindi film industry with the 2011 film Dum Maaro Dum and went on to feature in several Telugu, Tamil and Hindi films such as Naa Ishtam, Department, Krishnam Vande Jagadgurum, Arrambam, Baby, Bangalore Naatkal, Housefull 4 and The Ghazi Attack. Miheeka Bajaj runs an interior decor and event business called Dew Drop Design Studio.