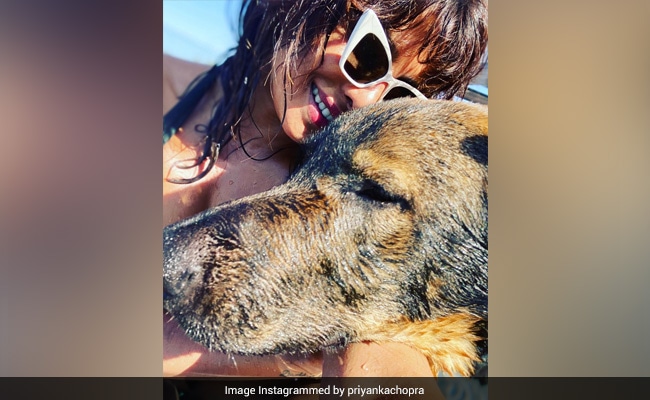 Priyanka Chopra is chilling like a villain in California and her latest post on Instagram proves it. The actress, who lives in Los Angeles with her husband, singer Nick Jonas, posted a photo of herself and their pet dog named Gino on social media on Sunday and her fans just loved it. In the picture, the actress can be seen clicking a selfie holding Gino in her arms. Going by the picture, it appears the duo were having a whole lot of fun in a pool. Sharing the photo on Instagram, Priyanka Chopra wrote: "My lil big boy!" and added a heart emoji. The actress' fans flooded her post with comments like "pretty", "such a nice picture" and "you look cute."

Priyanka Chopra gifted Gino to Nick Jonas last year. After the actress surprised Nick with Gino, he even shared some pictures and video from featuring the pup and wrote: "Pri came home with the absolute best surprise this morning. Please meet our new pup Gino. I haven't stopped smiling since I woke up this morning and finally realized what was going on. Thank you, Priyanka Chopra."

Pri came home with the absolute best surprise this morning. Please meet our new pup @ginothegerman I haven't stopped smiling since I woke up this morning and finally realized what was going on. Thank you @priyankachopra

Our new family portrait! Welcome to the family, Panda! We adopted this little rescue (soon he won't be so little) just a few weeks ago. We can't be sure but he seems to be a Husky Australian Shepard mix.... and those eyes... and the ears!!! BTW @diariesofdiana wasn't around for our little photoshoot, but we couldn't leave our #1 girl out...so...we made it work! @ginothegerman @pandathepunk @nickjonas @hollywood_huskies

Just a day ago, Nick Jonas celebrated the birthday of their oldest fur-baby Diana. The couple are also parents to a Husky-Australian shepherd mix named Panda.

In terms of work, Priyanka Chopra has featured in several Hindi films such as Kismat, Mujhse Shaadi Karogi, Aitraaz, Blackmail, Waqt: The Race Against Time, Krrish, Don, Love Story 2050, God Tussi Great Ho, Fashion (for which she even won the National Film Award for the Best Actress), Kaminey, Drona, 7 Khoon Maaf, Barfi!, Agneepath, Mary Kom and Dil Dhadakne Do, among many others.

She has Netflix's superhero film We Can Be Heroes and a film with actress-comedian Mindy Kaling lined-up. She will also be seen in Netflix film The White Tiger and Amazon's series titled Citadel.