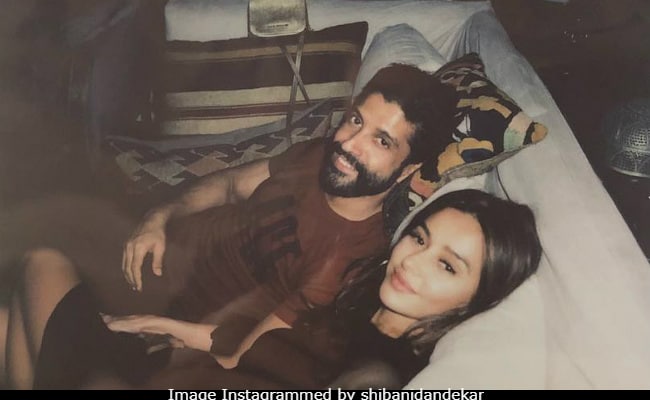 Rumoured couple Farhan Akhtar and Shibani Dandekar find a spot on the list of trends every other day and Sunday was one such day. On Sunday afternoon, the model-actress-TV presenter Instagrammed what's called the photo of a photograph, in which she features with the Dil Dhadakne Do actor, who she is reportedly dating. Shibani simply tagged Farhan in the caption, who then re-shared the photo on his feed, tagging her in turn. Shibani and Farhan's Instafam spotted the posts on their respective accounts and went into a tizzy over how adorable they look together. Guess who was one of the first ones to comment on Shibani's post? It was none other than Farhan himself, who responded with the kiss smiley. "I'm in tears," wrote designer Masaba Gupta while Gaurav Kapur (who often co-hosts with Shibani) added: "Cuties." Shikhar Dhawan's wife Aesha wrote: "Aww."

Meanwhile, another user also added: "Oh, just get married already," while another comment read: "Why so cute!" We won't keep you waiting for long. Here's what Shibani shared for Farhan. In the polaroid click, the two can be seen chilling on the couch, hand-in-hand.

Farhan and Shibani have never confirmed their speculated relationship status in as many words but their frequent appearances on Instagram together and social media exchanges appear to say it all. They were recently spotted enjoying a Christmas dinner hosted by Shibani's sister VJ Anusha Dandekar.

Christmas really is my favourite time of the year... I love having family and friends together & everyone laughing, drinking & dancing. So grateful for all of it. It was so strange not to have it at home this year but thankyou @jwmarriottjuhu for making it a home away from home experience #thankyouuniverse

Just before that, Farhan sent the Internet into some sort of a meltdown as he made an interesting Instagram post featuring Shibani, with the caption: "Now you see her. Now you don't."

In October, Farhan Akhtar appeared to make it Instagram official with Shibani Dandekar.

Farhan and Adhuna Bhabani divorced in April last year after 16 years of marriage. They are parents to two daughters Shakya and Akira. On the work front, he is filming The Sky Is Pink, which also stars Priyanka Chopra.