"If you're a soldier in the Himalayas, your face is going to be red, that's the makeup," said the makers 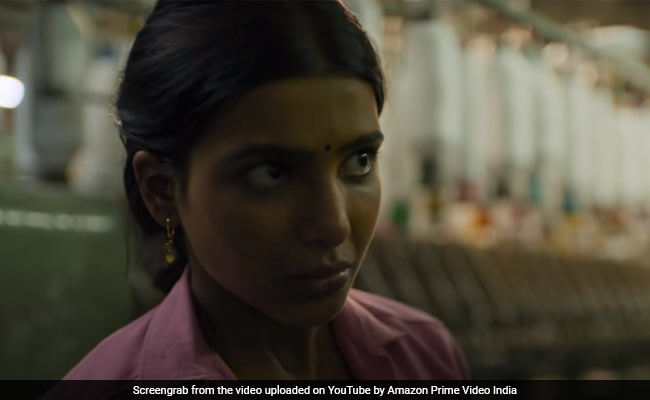 Samantha in a still from The Family Man 2. (courtesy YouTube )

Samantha Ruth Prabhu's portrayal as Raji, an unwavering Sri Lankan Tamil liberation fighter on a suicide mission in the recently-released series The Family Man 2, opened to largely stellar reviews from both the critics as well as the audiences. However, a section of the Internet flagged concern over the visibly darker skin tone that Samantha sported in the series. In a recent interview with Film Companion,The Family Man 2 show runners Raj Nidimoru and Krishna DK explained the reason behind turning Samantha's skin tone several noticeable shades browner because "her character demanded that she had to be fit, because she's a military person." They also stated that as "responsible filmmakers," they wanted to establish that the idea was not to propagate any context of beauty or race. It was as simple as what the character demanded.

"This whole thing comes in the context of beauty when you're trying to say dark skin is not beautiful and fair skin is beautiful... This is not that context, number one. There is no context of skin beauty in this. We are all shades of brown. Now, the idea is that if each one is a shade of brown, so it's not about getting a different race to play this (character). It's not a race thing either," Raj said during the interview.

During the interview, Raj explained that Raji's character was someone who would not have "time for worrying about self-care." He added, "Here we are trying to get the character of Raji right. We want her to speak it, we want her to look it, we want her to be that action girl who can land the punch, someone who can be physically fit and take on a guy double her size. That's our main challenge. So if you look at what she wears... She's a soldier, she's a weather-beaten girl, there's no time for worrying about self-care. If you're a soldier in the Himalayas, your face is going to be red, that's the makeup."

DK added that Samantha  trained for three months vigorously to get into the skin of the character and that Raji had to look a certain way, given her field of experiences and that make-up and costume were just one aspect of it. "She learned martial arts, a specific dialect and more. She learned this particular dialect of Tamil, which is not her usual Tamil. Now add to that the concept of hair, makeup and costume, that is the complete character that we are presenting. This is the character of Raji; she looks a certain way, she walks a certain way, and she's a killing machine, and that's all there is to it," DK added.

Neeraj Madhav On His "First Crush," Becoming A 'Family Man' And More