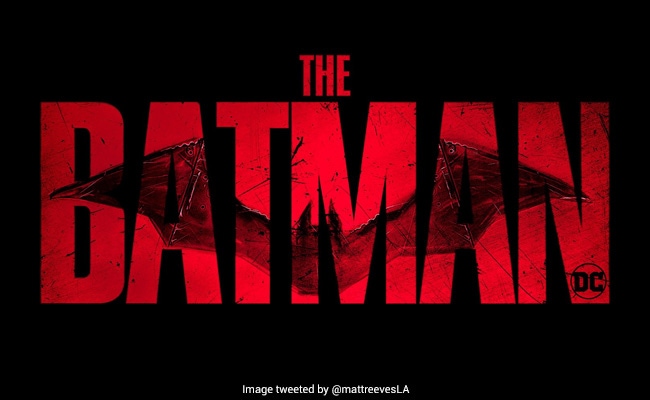 A closer look at The Batman logo (courtesy mattreevesLA)

Okay, so this just happened. The Batman director Matt Reeves shared the logo of the much anticipated and much talked about film, headlined by actor Robert Pattinson in the titular role. As bonus, fans also got a teaser poster of a fan-art version of Robert Pattinson's Batman, created by Jim Lee, who is the Chief Creative Officer of DC Comics. Both the logo and the teaser poster feature just two colours - black and red - setting a dramatic and brooding theme. Matt Reeves shared the brand new logo and the teaser poster just ahead of DC FanDome - a virtual event, expected to make big reveals about DC Comics' world of projects over the weekend. Matt Reeves also made a promise that more about The Batman will be unveiled at the upcoming DC FanDome: "See more of The Batman at the DC FanDome global event in the Hall of Heroes this Saturday, 8/22!"

Excited to share the very first look at our official #TheBatman logo, and some very cool additional #DCFanDome artwork by the amazing @jimlee - see more of #TheBatman at the #DCFanDome global event in the Hall of Heroes this Saturday, 8/22! #TheBatman#DCFanDome#ForTheFanspic.twitter.com/ApfngNbyor

Meanwhile, needless to say that the new Batman logo sent Twitter into meltdown. This tweet summed up the general emotion on Twitter: "I'm all in on The Batman's aesthetic." Here's how Twitter reacted to the new logo and teaser poster.

I'm all in on The Batman's aesthetic. Looks great. Can't wait to see Catwoman.

Can't wait to get our first tease of "The Batman"!

OMGGGGGG IT IS SOOO BEAUTIFUL pic.twitter.com/kAU7E3gnWH

Matt Reeves had also sent the Internet into a tizzy in February, when he dropped the first look of Robert Pattinson as Batman in a dramatic teaser, which was actually a camera test clip:

Robert Pattinson's full look in the batsuit and the new batmobile were teased in March:

While the excitement over The Batman multiplies with each new reveal, not much has been revealed about the film's storyline. Robert Pattinson's Bruce Wayne will reportedly feature in a much younger persona and the film will have a slew of villains like The Penguin and The Riddler. Matt Reeves revealed in previous interviews that his film will focus on Batman's identity as the "world's best detective." The ensemble cast of the film also includes Zoe Kravitz as Catwoman, Paul Dano as The Riddler, John Turturro as Carmine Falcone, Peter Sarsgaard as Gil Colson, Jayme Lawson as Bella Real, Andy Serkis as Alfred Pennyworth and Colin Farrell as The Penguin.

The Batman is expected to release sometime in 2021.